Shisa get their day on Wednesday 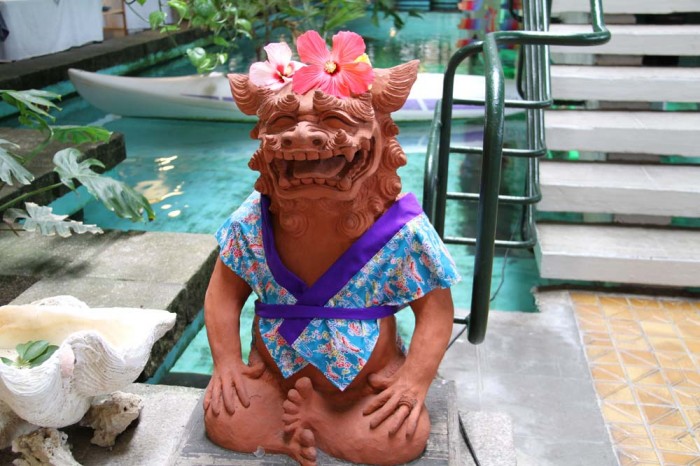 All Shisa on Okinawa will be happy on their special day on April 4.

April 3 is the “Day of Shisa” in Okinawa.

Four is SHI, and three is SAN in Japanese. This is why April 3rd is the Day of Shisa. The day was established in 2002 to expand Shisa from Tsuboya district in Naha, the birthplace of Yachimun and Shisa.

Shisa is a traditional Ryukyuan decoration, usually in pairs, resembling a cross between a lion and a dog. It originates from Okinawan mythology. People place pairs of shisa on their rooftops or flanking the gates to their houses with them as Shisa are believed to be wards, and protect people in the house from evils. When in pairs, the left shisa traditionally has a closed mouth, the right one an open mouth. The open mouth wards off evil spirits, and the closed mouth keeps good spirits in.

From the Edo period they started to be called “guardian dogs” in general in mainland Japan. Gender is variously assigned to the 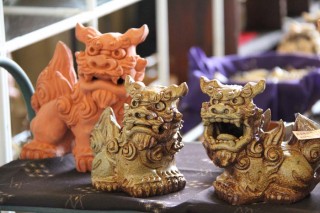 Shisa are the most popular souvenirs among visitors to Okinawa, and every house here has at least one pair.

The shisa, like the komainu (lion dogs), are a variation of the guardian lions (“fu dogs”) from China. The shisaa, or lion dog, is an Okinawan cultural artifact. In magic typology, they might be also be classified as gargoyle beasts. They all are traditionally used to ward off evil spirits.

The legend of shisa began when a Chinese emissary returned from a voyage to the court at Shuri Castle, and he brought a gift for the king, a necklace decorated with a figurine of a shisa-dog. The king found it charming and wore it underneath his clothes. At the Naha Port bay, the village of Madanbashi was often terrorized by a sea dragon who ate the villagers and destroyed their property.

One day, the king was visiting the village, and one of these attacks happened; all the people ran and hid. The local noro had been told in a dream to instruct the king when he visited to stand on the beach and lift up his figurine towards the dragon; she sent the boy, Chiga, to tell him the message. He faced the monster with the figurine held high, and immediately a giant roar sounded all through the village, a roar so deep and powerful that it even shook the dragon. A massive boulder then fell from heaven and crushed the dragon’s tail. He couldn’t move, and eventually died.

This boulder and the dragon’s body became covered with plants and surrounded by trees, and can still be seen today. It is the “Gana-mui Woods” near Naha Ohashi bridge. The townspeople built a large stone shisa to protect it from the dragon’s spirit and other threats.

At Tomimori Village near Kochinda Town in the far southern part of Okinawa, there were often many fires. The people of that area sought out Saiouzui, a Feng Shui master, to ask him why there were so many fires. He believed they were because of the power of the nearby Mt. Yaese, and suggested that the townspeople build a stone shisa to face the mountain. They did so, and thus have protected their village from fire ever since.