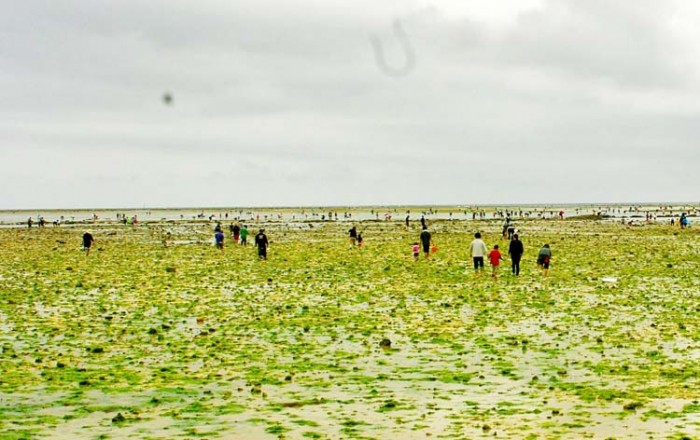 Nowadays Hamauri is mostly a reason for the family to go together to a beach and collect seafood from the reefs during the low tide, followed by a picnic on the beach.

Hamauri is one of Okinawa’s oldest customs, a time when people cleanse themselves of evil spirits.

On Mar. 3rd of the lunar calendar, women go to the beach to dip their hands and feet in the water as a way of purifying the body. They also pray for a healthy life, and special food and sweets would be provided to the family altar. In the old days, when the women went to the beach, they would feast on the beach after the cleansing themselves.

This used to be strictly a custom only women participated in, but now it’s more of a family event to gather shells and enjoy a picnic lunch even eat at the closest restaurant. On March 3rd by the lunar calendar, the tidal range usually has a vast variance, allowing beach goers to harvest seafood such as seaweed and clams.  This is a particularly famous date on Miyako Island as a vast reef off the island called “Yaebishi” pops above sea level just once a year at this time, and hundreds of people travel there on boats and ferries to gather shellfish. Officials remind people to remember that “time flies when you’re having fun, so make sure not to loose track of time, for the tides rise even when you’re not looking.”

Many people in Okinawa are still very superstitious and believe that the Hama uri tradition of purifying yourself in the sea will cast out bad spirits and curses that have been put especially on the girls. This is also a day of prayers to ensure the good health of all the girls in the family.

According to a legend, hama uri started long ago in Okinawa when a young man visited a young girl of marriage age one evening. The man was well dressed and clearly of the noble class. He sweet talked the young woman and became intimate with her. Upon finding that she had become pregnant, the girls’ parents decided they must find out about who the nobleman actually was since he had never said where he was from. The parents told the girl to stick a needle with a very long thread into the bottom of the nobleman’s kimono when he next visited.

That night as the nobleman slept, the girl did as her parents had instructed her.

The next morning the parents followed the thread far into the forest and into a cave. Deep inside the cave a huge snake was coiled up and was talking. The snake said if the girl did not enter the sea to purify her body, she would bear his children. The parents then realized he was not a man at all, but an incarnation of a magical snake.

When the parents returned home, they immediately took their daughter down to the sea so she could purify her body in the salt water. Much to their surprise, dead baby snakes flowed from her body. The spell of the evil snake was broken and the young nobleman was never seen again.