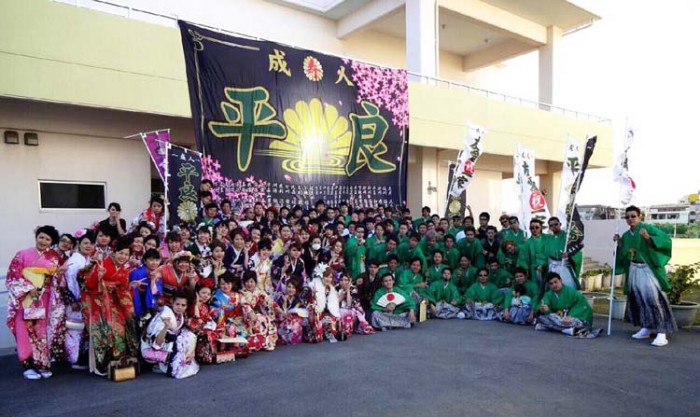 For thousands of young men and women in Okinawa, and countless thousands more in mainland Japan, Monday’s going to be the biggest day of their lives. 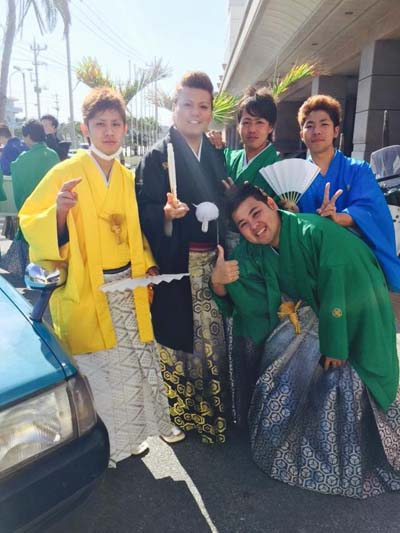 A group of young men dressed to impress on their big day.

Seijin no Hi is coming up Monday, and it’s THE big day for thousands of young people who turned 20 during 2014 or will through Mar. 31st 2015. Coming of Age Day is a national holiday honoring youth who’ve reached the age of adulthood, where they can now legally drink, vote, be legally responsible for business decisions and even get married without parental consent.  It’s a day to dress up in traditional kimonos, participate in ceremonies, and take memorable photographs.

With many Okinawans already gathered in family homes for the Christmas and New Year holidays, ceremonies have already begun in advance.  Over the past week, since the beginning of January.  High School graduates who turned 20 last year have held their own special ceremonies, decked out in kimonos and with fancy hair decorations and coming together from all over Okinawa for the first time since their graduations two years ago.

Formal ceremonies are generally held Monday morning at local city offices throughout Okinawa. All young adults who turned or will turn 20 between April 2nd of the previous year and April 1st of this year, and who maintain residency in the area are invited to attend. Government officials give speeches, and small presents are handed out to the newly recognized adults.

The Seijin no Hi holiday has been celebrated the second Monday in January since 2000, marking transition to adulthood.  Centuries before, boys were viewed as coming of age at 15, while girls celebrated coming of age at the tender age of 13.   In 1876, the government decreed 20 to be the legal age of adulthood.

On Okinawa, ceremonies take place with a variety of styles, some with puffy sleeves, elaborate designs and bright colors.  Furisode, the most formal kimono worn by unmarried women, signifies the transition of young ladies to adulthood.  Boys mostly wear suits and ties or traditional hakama to the ceremonies.