Itoman City is the southernmost city on the Okinawa main island. It is a city that is often referred to as a ‘fisherman’s town’; because for many, fishing is a way of life here. They are “uminchu”, a term that means ‘fisherman’ in the Okinawan dialect. And because life is centered so much around fishing, the people of Itoman heavily rely on the lunar calendar for many of their cultural and functional activities.

This is mainly because the lunar calendar coincides with the tidal level during each phase of the moon. Thus, dictating when the fishermen go out to sea. The calendar also governs when many customs take place in the Itoman community such as the Itoman Giant Tug-of-War and the Itoman Haaray Dragon Boat Race (in Itoman, dragon boats are pronounced “Haaray” unlike “Haarii” in other places on Okinawa). These events are held strictly on the lunar calendar, regardless if they take place on a weekday or weekend. If either event falls on a weekday, many stores, companies, and even schools will still take the day off giving families the time to enjoy the festivities.

This year, the Itoman Haaray will take place on the 17th of June of the Gregorian Calendar. This day is May 4th on the Chinese Lunar Calendar. Fortunately for many, that day will also be Sunday, giving many non-Itoman residents the opportunity to check out the festivities. And the Itoman Giant Tug-of-War will be take place on September 24th of the Gregorian Calendar. This in turn will be August 15th of the lunar calendar and will occur downtown in the Itoman City.

Aside from fishing, there is also a lot of farmland in Itoman. One of Itoman’s famous produces includes sugarcane. In fact, you can find very large-scale sugarcane fields throughout the Itoman area. Sugarcane, along with other produce, are then sold at the Itoman’s Farmers Market, better known as “Umanchu Ichiba” which means “Everyone’s Market” in the Okinawan dialect. It is one of the largest and more popular Farmers Market on Okinawa.

Today, Itoman is much revered for its fishing, but it also has many scars from the past. Thousands of local residents perished as a result of the war. Others committed suicide; many leaping to their deaths from the ocean cliffs. It is a sad story. One that continues to be told today. Now a peace memorial sits in its place, built a long the ocean to remind us of the lives that were lost and the endless pursuit for peace.

The people of Itoman have risen from the dark past. Their rich heritage continues today; fishing, farming, and celebrating. All this and more as they pass their legacy to the next generation offering hope to the youth. On your next voyage, set your compass southward and visit Itoman City. Feel the nostalgia. Embrace the passion. Live the spirit of uminchu. Itoman will be waiting for you.

Santinmou observatory sits on a hill and offers a great view over Itoman City. In the old days before the observatory was made, the hill was used as a landmark by fishermen to determine their location. Today, it’s considered a sacred place. During the annual Itoman Haaray (dragon boat races), teams appointed to bear the flag perform a commencement ritual here before the festivities begin. 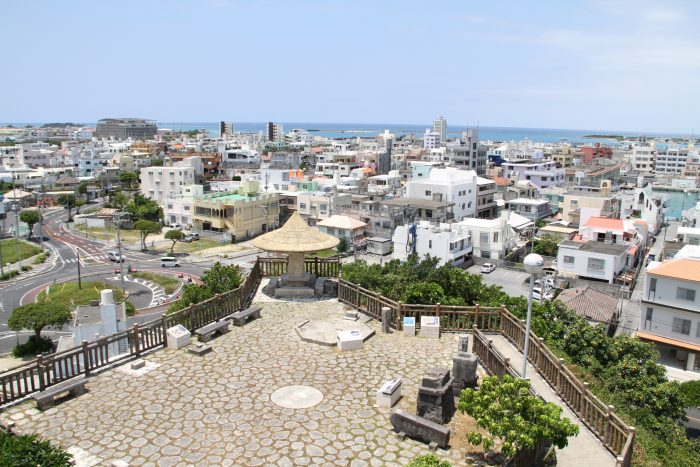 A view of Itoman City from the Santinmou Observatory. 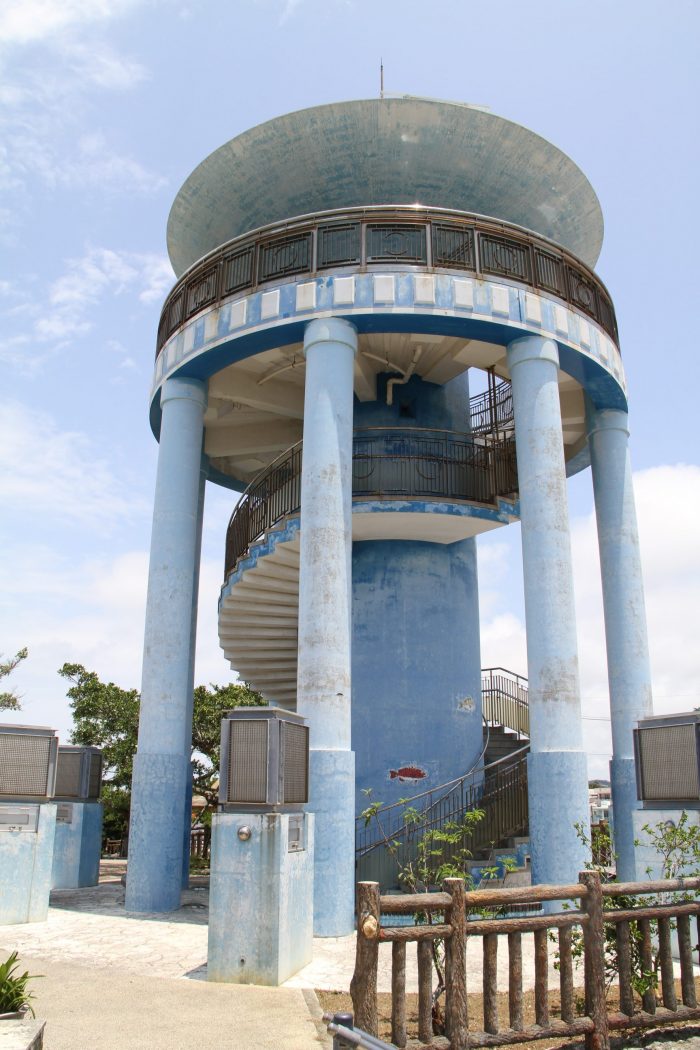 The Santinmou Observatory, a well-known fixture of Itoman City.

The Gushikawa Castle Ruins located in the Kyan District of Itoman City is believed to have been built around the 13th Century. The stone walls are aesthetically appealing and have a hint of nostalgia of the old Ryukyu Kingdom era. A unique feature of this castle ruin is a hole that takes you down to the beach underneath. The coast near the castle ruins is also a popular spot for surfing. 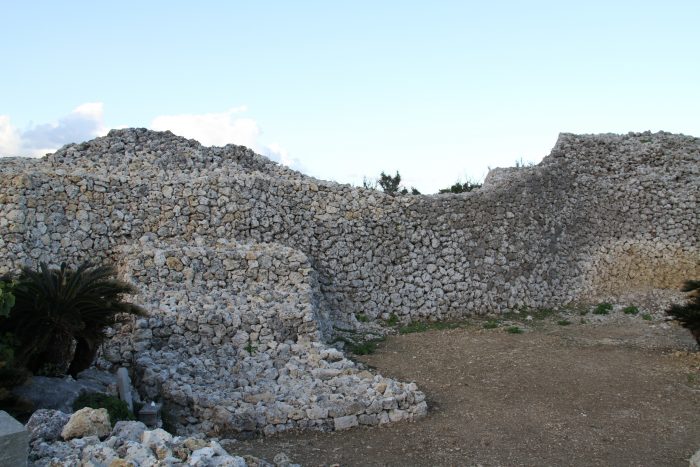 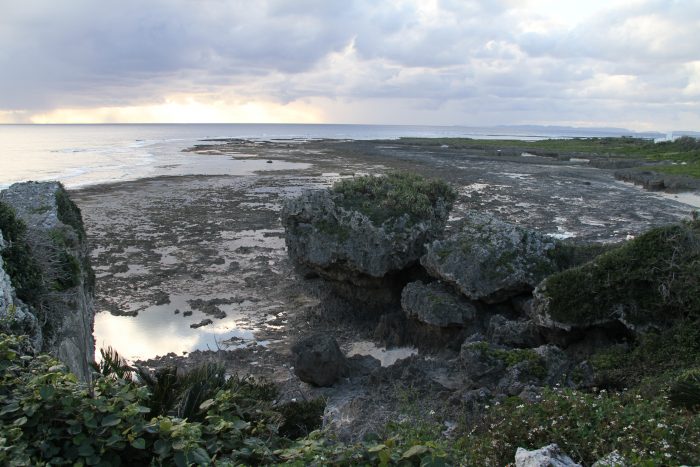 Nanzan means Southern Mountain in Japanese and at one time, it was an important region during the Old Ryukyu Kingdom Era. Today, remnants of an old castle stone wall still remain, along with the Banyan Trees that have taken root there. Part of the castle sits on the Takamine Elementary School grounds. Please use caution when walking within the vicinity as to not to disturb the school in session. 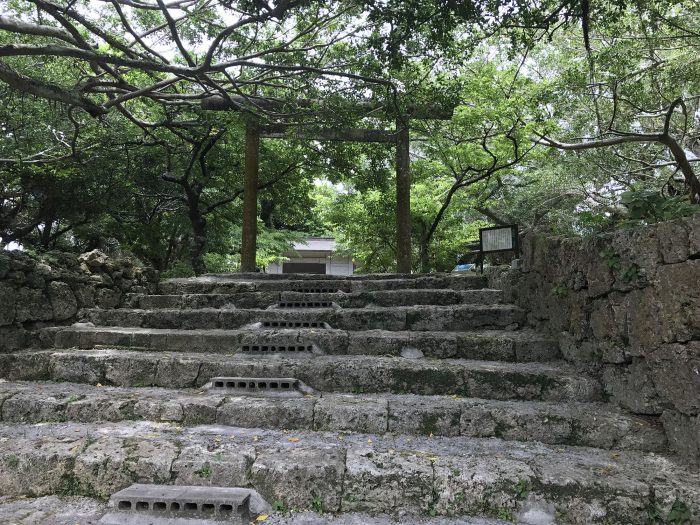 The Nanzan Castle, where once powerful lords ruled.

Odohama Coast is a popular diving and snorkeling spot. Many sea turtles also come here to lay their eggs. It is also sometimes called the John Man Beach, as it is the landing site of John Manjiro when he was returning from his trip to America heading back to Japan. This was during the time when Japan was still isolated from the rest of the world in the 1850s. 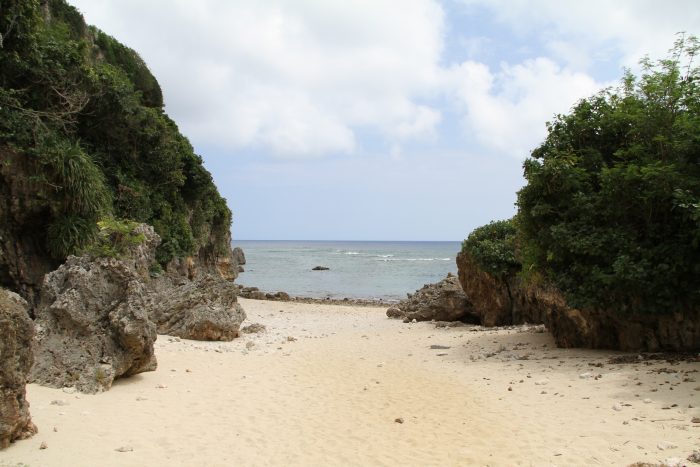 The Odohama Coast, a favorite spot amongst surfers.

5. The Statue of John Manjiro

John Manjiro, born in 1827, is from Tosashimizu District of the then Tosa domain (Currently, the Kochi Prefecture of Japan). John and some other member were caught in a storm when they were fishing. A U.S. whaling vessel had rescued them and took them to Hawaii. After a while, he visited the U.S. mainland and worked as a whale fisherman. He eventually started attending a university there, but after a while, he decided to go back to Japan. He would stop at the Ryukyu’s on his way back. His first landed at the Odohama coast in Itoman.

At that time, the Ryukyu’s was a separate country from Japan and so he was taken into custody during his visit. He was treated fairly well and made a lot of friends with the local people, especially with a man named Chochu Mashiki, a high-ranking officer of the Ryukyu Government. Mashiki was particularly interested in a book which John brought from the U.S. It was the biography of George Washington which was influential to many in the Ryukyu and Japanese government circles.

Finally after a 11 years, he went back to his home in Japan. He continued to whale but also worked as a National interpreter and translator. He is considered the first Japanese student abroad and has become a very famous figure in Japanese history. In 2018, the statue of John Manjiro was erected at the Odohama coast in Itoman. 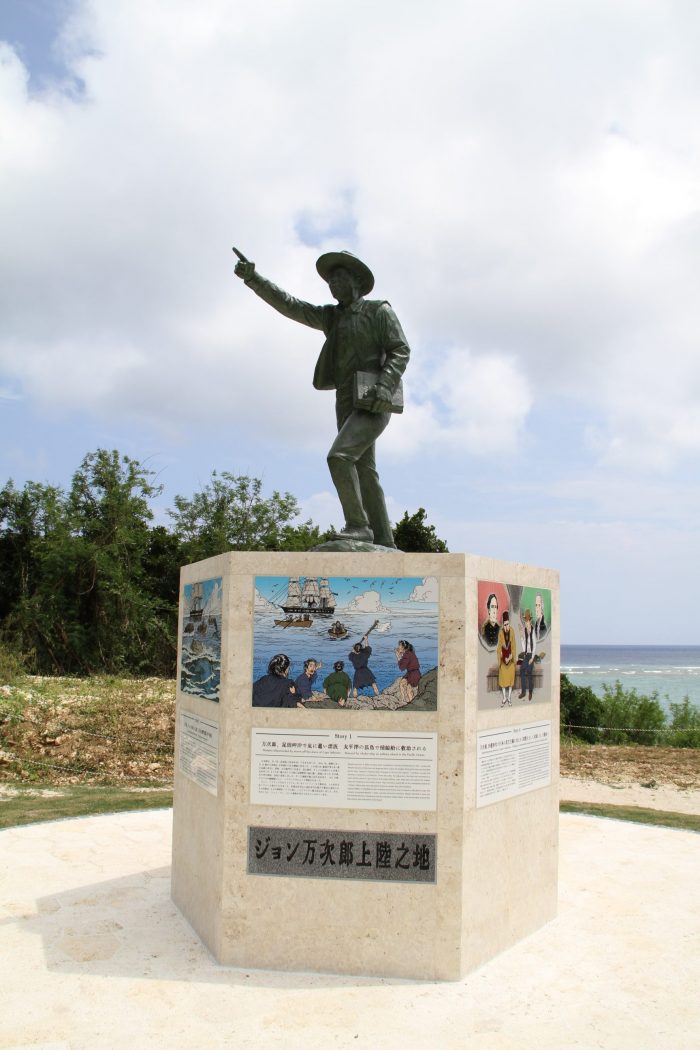 A statue of John Manjiro statue, built in 2018.

Yoza Gaa is a water spring located in the Yoza District of Itoman City. Many farmers use it to fill their water tanks for cropping. The spring is also used by families and kids during the summer season and nearby is a waterwheel that is used during spring to help make brown sugar. 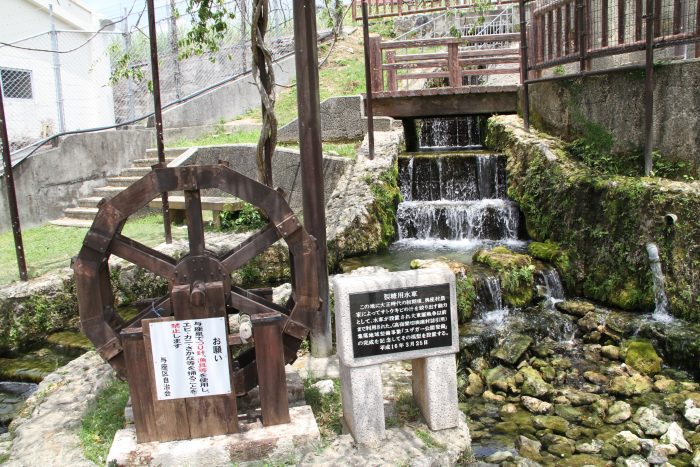 The Yoza Gaa (water spring) a hidden, but fun place in Itoman. 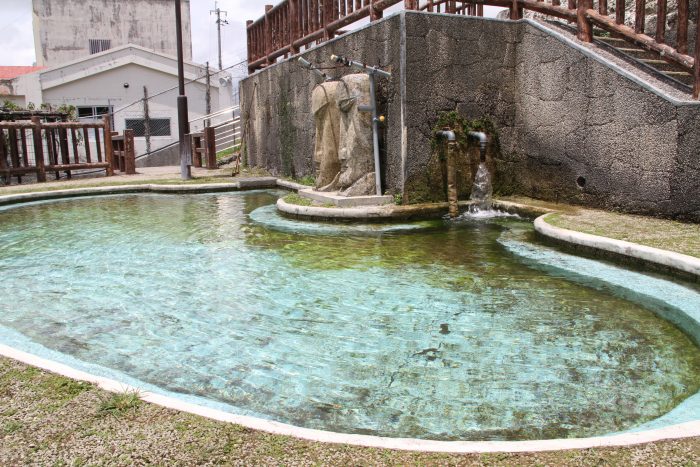 Need to cool down? A water pool at the Yoza water spring.

Kadeshiga is a water spring located in the Ohozato District of Itoman City. It is one of the biggest springs on the island. Fish and small shrimp can be found inside the pool of water. This is also a popular spot for local children during the summer season. 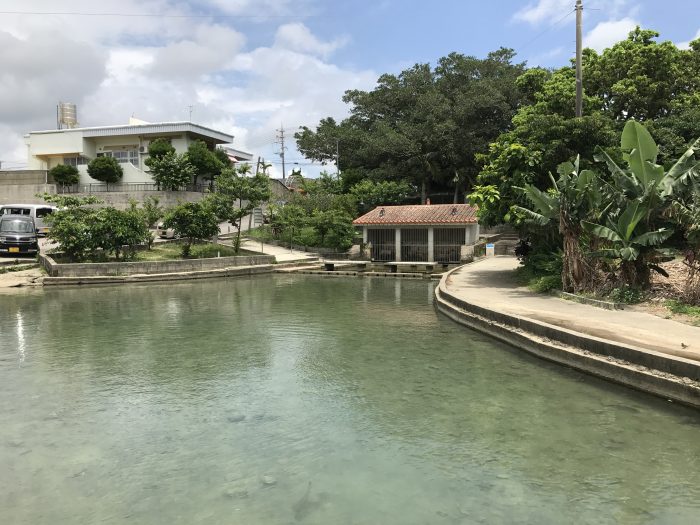 Kadeshiga, historical yet fun for the kids.

Nishizaki Shinsui Park has a man-made waterfall and a small stream where children can play at their leisure. If you’re lucky, you can even see some fish and turtles in the big pond. Kids can enjoy using the different kinds of playground equipment and have fun on the large slide that overlooks the pond. 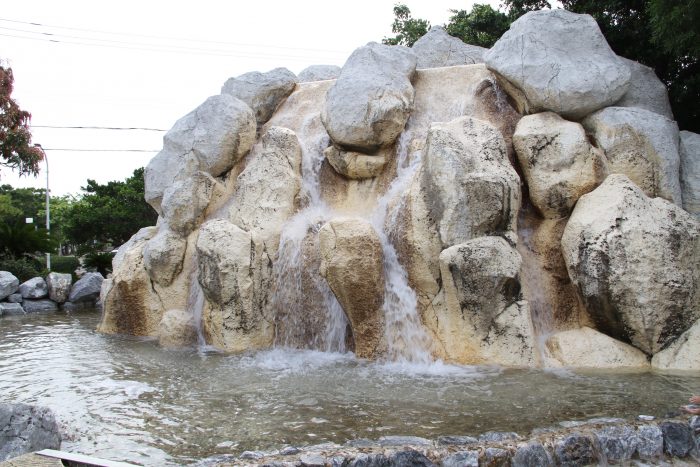 Manmade waterfall at the Nishizaki Shinsui Park. Fun for all! 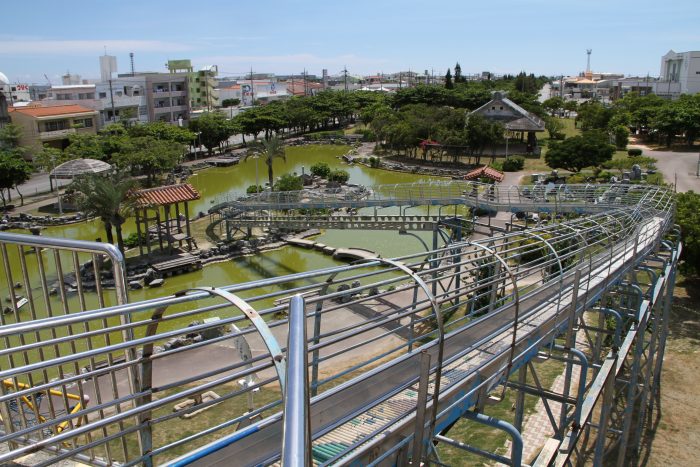 Take a ride on the Big Slide!

Bibi Beach Itoman is a man-made white sandy beach resort. The swimming season lasts from April through October. Coin lockers and showers are available for visitors. You can also rent out beach volleyballs and BBQ equipment. Marine sporting activities are also available for a nominal fee; the most popular being the banana boat and mable rides. 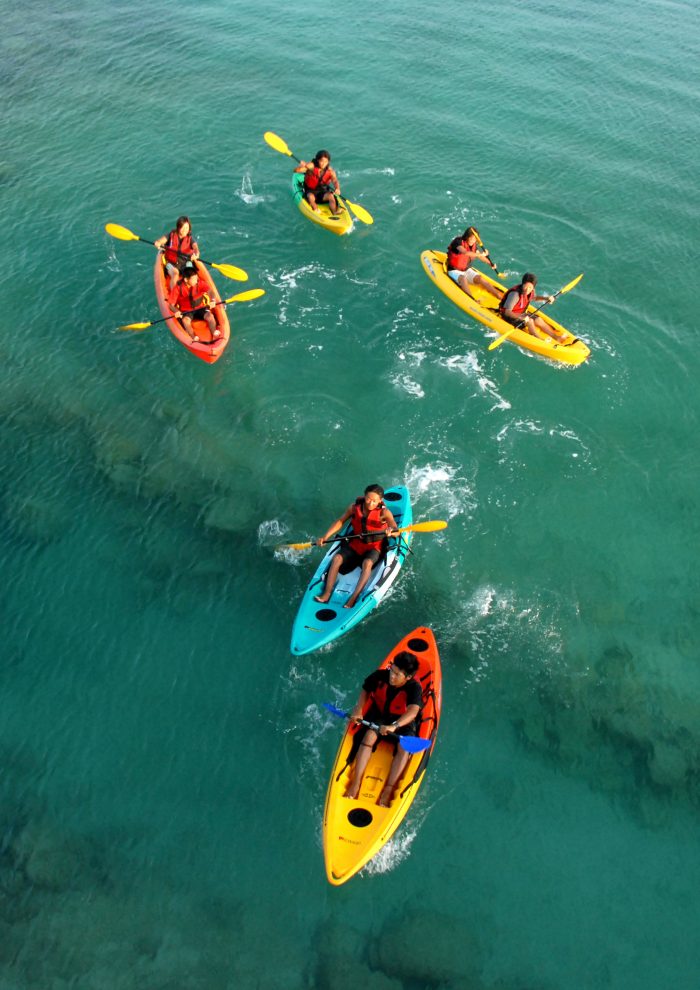 A lot of fun marine activities are available at Bibi Beach.

The Itoman Michi-no-Eki (Itoman Road Station) is Japan’s southernmost “Michi-no-Eki”. Within the vicinity is the Itoman JA Farmers’ Market, the city’s largest market of fresh vegetables and fruits. They also have the Osakana (fish) Market that sell fresh fish and other seafood delicacies. Additionally, there is the Itoman City Market Yukura that sell souvenirs and other locally produced goods. If you are hungry, stroll through their food court. One noteworthy restaurant is Bannai. Aside from their delicious steaks and spare ribs, they are known for offering employment specifically to physically challenged individuals. 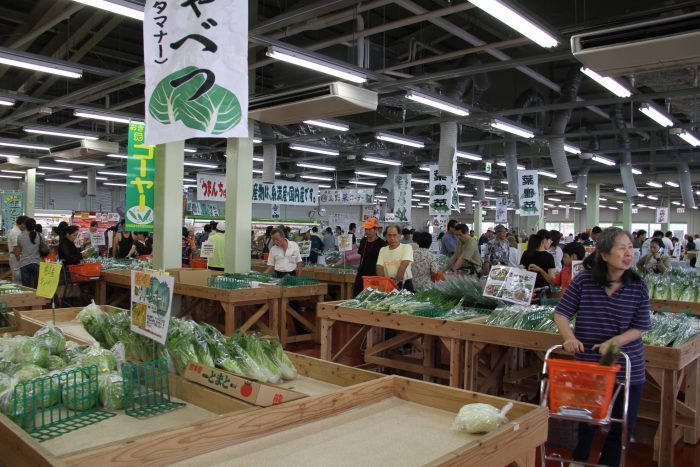 People searching for fresh vegetables at the Umanchu Market. 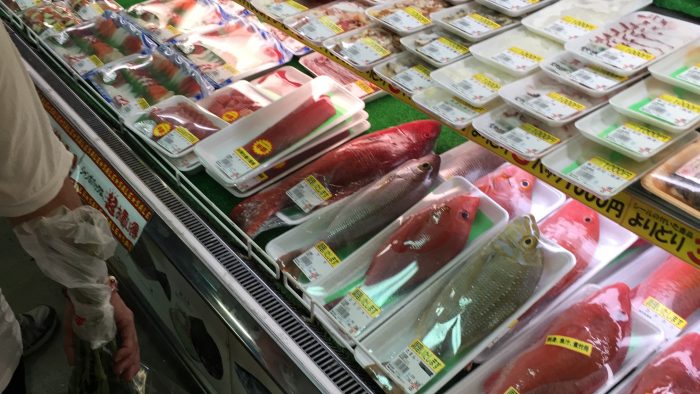 Itoman City, the best
selection of fish on the island.

Cape Kyan is located in the Kyan District of Itoman City. The location is known for its rugged cliffside and beautiful panoramic view of the ocean horizon. Despite its natural beauty, the area was subject to much bloodshed during the Battle of Okinawa. Many local people had committed suicide by jumping from the cliffs in order to evade capture by the U.S. Military. Today, people come and visit to pay their respects to the deceased. 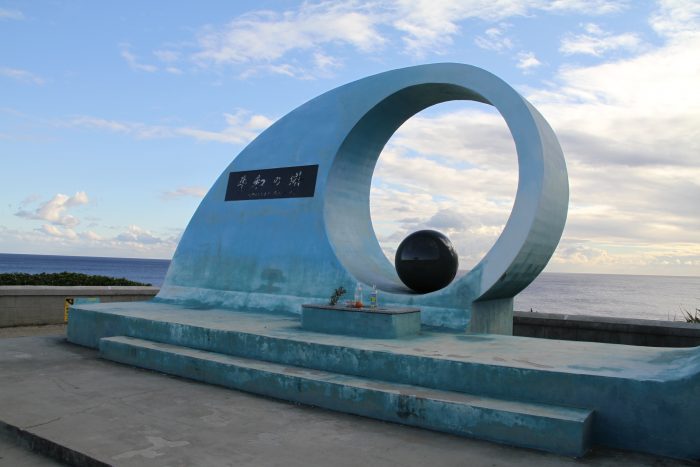 Cape Kyan, one of the most tragic sites during the Battle of Okinawa.

Heiwa Souzou-no-Mori Park is a very large park located in the Yamagusuku District of Itoman City. In 1993 the All Japan Tree-Planting Ceremony was held on location with the Japanese Emperor in attendance. Five years later in 1998, the park would have it official grand opening. There is a nice view of the ocean as well as multiple sports fields, an observatory, playground equipment, water fountains, and of course, many, many trees. 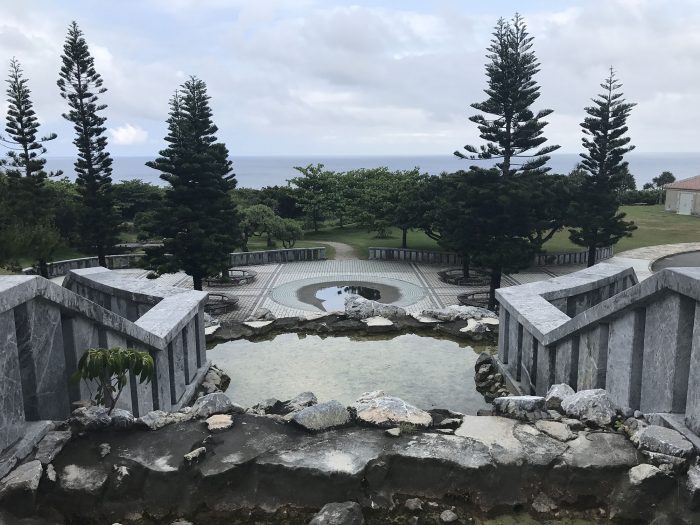 One of many peace memorial parks throughout Itoman.

The Lunar New Year celebration at the Itoman Fishing Port is well known throughout the island. During this time, boats inside the port are slung with colorful banners as fishermen pray for a prosperous fishing season. 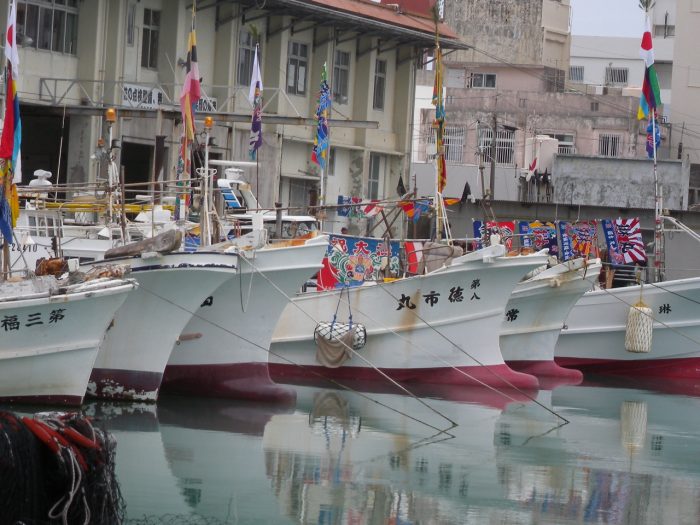 The Peace Memorial Park was built at the location of the last fighting grounds of the Battle of Okinawa. The mission of the park is to promote everlasting peace by passing down the historical lessons learned from the war. The park features the Peace Memorial Museum that contains a two-part exhibit presenting the past and future visions of Okinawa. The museum focuses on detailed local testimonies, mementos, and visuals from the war. 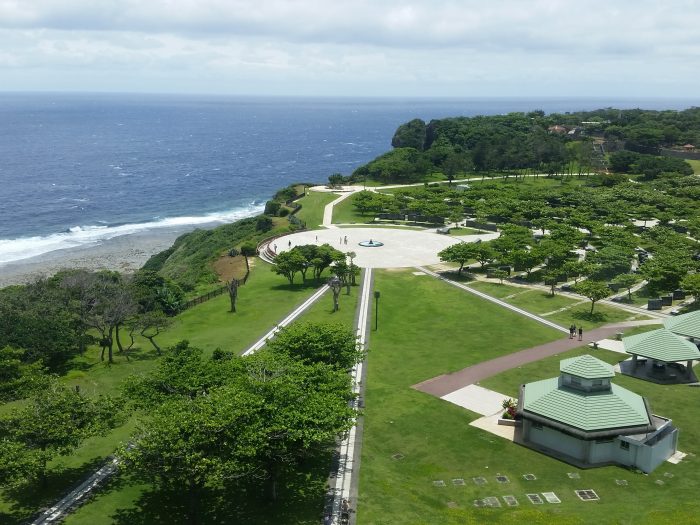