Nakagusuku Village is the second in Japan in terms of population density, following Kitanakagusuku Village, and has also been a key community dating to the 15th century.

Nakagusuku Castle Ruins come to life this weekend with a huge projection mapping event depiting the life of Gosamaru.

Located in central Okinawa, facing Nakagusuku Bay on the west, south of Kitanakagusuku Village, west of Ginowan City and north of Nishihara Town Nakagusuku is small with a population of only 19,000, but is rich in historical heritage. Part of the University of Ryukyus campus is within Nakagusuku Village, and its main road is Highway 329, which Okinawans call the west line. 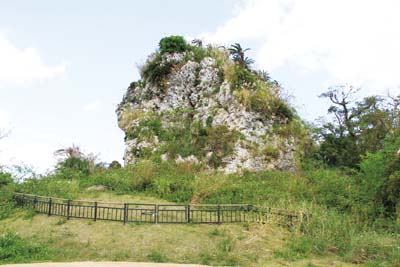 Commodore Matthew Perry raised an American flag on this rock on Hanta Path in Nakagusuku when he visited the island in 1853.

One of the most famous castle ruins on the island is the Nakagusuku castle located between Nakagusuku and Kitanakagusuku Villages. In the 15th century, the Nakagusuku castle belonged to Gosamaru, one of the most famous and popular lords in the Ryukyu Kingdom . The 6th King of Ryukyu, Sho Taikyu, one of the sons of the 2nd King, Sho Hashi who first unified the island, assigned Gosamaru move from Zakimi Castle in current Yomitan village to become the lord of Nakagusuku Castle to counter the lord of Katsuren Castle, Amawari. Amawari had increased his power at that time, and Sho Taikyu ordered Gosamaru stay at Nakagusuku because of its location between Katsuren and Shuri, the capital. 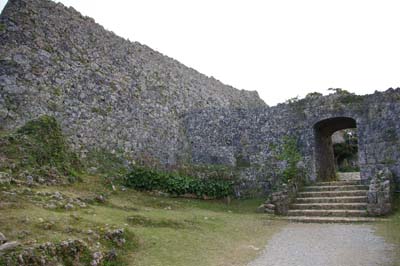 After a while, Amawari cheated Sho Taikyu and said Gosamaru planned on rising in revolt soon. Sho Taikyu believed it and let his government armies and Amawari attack Gosamaru. Seeing the approaching force Gosamaru committed suicide because he didn’t want to oppose Sho Taikyu even though he was cheated. Historians are now re-examining this story, and it could all be a royal trick to get rid of two lords who were becoming too powerful. That is because the government troops killed Amawari shortly after Gosamaru died. Some historians also speculate that Amawari’s wife, who was the daughter of King Sho Taikyu convinced her farther that Amawari had not plotted against the King, and asked Gosamaru be killed, too. But the true story is still a mystery.

Nakagusuku Village is surrounded by ocean and hillsides, and most parts of the ocean side are farm fields, while the hilltop side is becoming urban. The views from the hillside are gorgeous, and cafes and restaurant are increasing in the area to take advantage of the view. There are well-known sweets shops, farmers’ facilities, and a golf course.

Next weekend, the 22nd and 23rd of November, a huge projection mapping event will be held at  the Nakagusuku Castle ruin, depicting the legend of Gosamaru. An opening concert starting at 7 p.m. on both days is included in the program. Gates open at 5 p.m. and entry is free.  A word of caution:  while admission is free, there are no parking spaces and use of the shuttle bus from temporary parking spaces at Yoshinoura Park, Naritasan Temple or Nakagusuku Park northern parking area is required.  On Nov. 29th popular Japanese musician Misia will perform, and a day later, on Nov. 30th, Masayoshi Yamazaki & Motohiro Hata will hold a concert at the Nakagusuku Castle ruin park.

There are a lot of historical assets in Nakagusuku, and one can easily feel Ryukyu as it was in ancient times!! 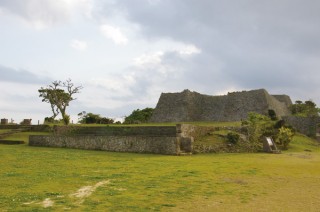 Nakagusuku Castle ruin is located on the border between Nakagusuku and Kitanakagusuku villages and was designated a UNESCO World Heritage Site in 2000. Gosamaru, the 15th century Ryukyu Kingdom era lord of Nakagusuku, lived in the castle, and crowds of Gosamaru fans visit the ruins every year. Commodore Matthew Perry also visited the castle during his visit to Okinawa in 1853, and admired the high level of the construction of the castle. Nakagusuku Castle ruin is located at https://goo.gl/maps/TdQBK 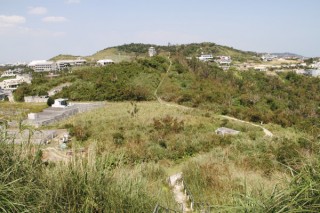 Hanta Path is a part of the ancient western main road connecting Katsuren Castle to Shuri Castle. Hanta is Okinawan dialect meaning cliff, and the name reflects the panorama view over Nakagusuku Bay one can view from the path. It is said that the path was built during the 12 to 15th centuries. There are many historical assets along the path, and the still existing portion is about 7 km long in the Nakagusuku Village area. The path is at https://goo.gl/maps/WvC1h 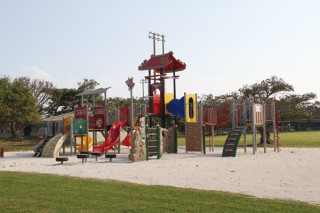 Yoshinoura Park is located on the ocean side of Nakagusuku Village. The park is rather large, and there are gymnasium, kids playground, baseball field, tennis court, and soccer and track fields, and also a beach. You can walk or run around the park, and the beach is clean and calm. The park is open 9 a.m. – 10 p.m. and closed on Tuesdays and during the New Year holidays. It’s located at https://goo.gl/maps/40DA6 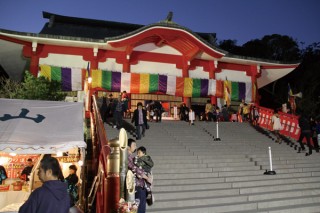 Naritasan Fukusen Temple is located on a hillside facing Nakagusuku Bay, making it a famous spot to watch sunrise. Especially during the New Year days, huge numbers of people come to the temple to pray for their health and prosperity for the new coming year. Narita-san is at https://goo.gl/maps/Lv7Nu 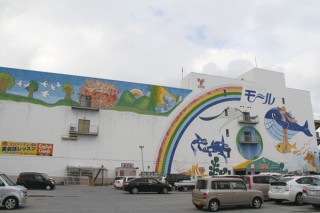 Nakagusuku Mall is a well-established furniture mall that opened in 1961, and has been in the business for more than 50 years. The three-story building houses a large furniture shop on its second and third floors, while Mermaid Cafe, Kanehide supermarket and Duo English School occupy its first floor. From the Mermaid Cafe you can enjoy the view over Nakagusuku Bay. The café is open 10 a.m. to 8 p.m. every day. The mall is at https://goo.gl/maps/5DQwp 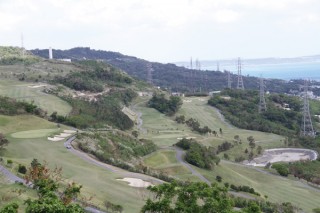 Ocean Castle Country Club is a golf course located in Nakagusuku Village with a very nice ocean view and plenty of green nature around. When playing the 18-hole course one can enjoy the Okinawan nature at its best and the picturesque view. After the game, players can take a bath and have a meal in the clubhouse. The facility is open from 6 a.m. every day. The location is at https://goo.gl/maps/djK3S 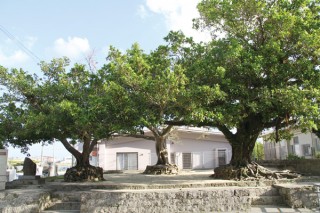 Ishadou is a district of Nakagusuku Village that was located near Nakagusuku Castle until 400 years ago. It moved to its current location near the ocean around 1600 for reasons that nobody knows any more. Those three banyan trees were planted by the first three couples who moved to the current Ishadou district. The three trees that currently grow in Ishadou are the 3rd generation of the trees that were planted after the World War II. Ishadou is at https://goo.gl/maps/UIvGE