The Zento Eisa Matsuri, the All Okinawa Eisa Festival, takes place every year on the first weekend after Obon. This tradition began in 1956 at what was then called Koza, what would be today’s downtown Okinawa City. It has been held every year since and has become Okinawa’s largest Eisa event.

This year the three-day festival runs from Aug. 23 through Aug. 25 and will take place on Gate 2 Street and at the Okinawa City Athletic Park.

The event kicks off at 18:30 Friday, August 23rd, with a ‘Michijune’ parade. A number of Eisa groups will sing and march from Route 330 to Kadena Gate 2. Gate 2 Street will be closed to motor vehicle traffic during the event. The parade ends at 21:00.

The official opening ceremony starts the next day, Saturday, at 15:00 at the Okinawa City Athletic Park’s outdoor field. Promptly after, more than ten youth groups from Okinawa City and other municipalities around Okinawa will showcase their Eisa prowess. The performance will take place from 15:10 to 20:35. 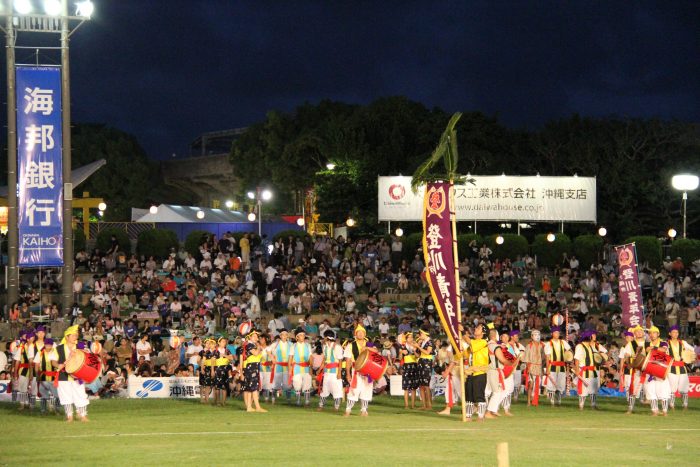 On Sunday at 15:00, the venue continues at the Okinawa City Athletic Park’s outdoor field with the Children’s Eisa performance commencing that day’s Eisa celebration. They will be followed by over ten highly-skilled select Eisa groups from various parts of the island. Each group will showcase their unique Eisa style as performed in their district. Over the years, Eisa has slowly evolved with the times. Groups have added new moves and music to their already traditional Eisa performances.

The events on both Saturday and Sunday will conclude with the famous “kachashi” dance where everybody is invited to dance and sing together. Then at 20:35, the grand finale begins with a fireworks display and a laser show.