The Naha Giant Tug-of-War is the largest of its kind throughout the world. This feat was officially recognized and recorded into annals of the Guinness Book of World Records in 1995, and today, the event continues to draw tens of thousands of people every year.

The tug-of-war is part of a three-day event called the Naha Giant Tug-of-War Festival with the actual tug-of-war occurring on the 2nd day. It is considered the largest festival in Okinawa. This year the festival will be held from Saturday, October 12 to Monday October 14th. Monday is also the Japanese National Holiday known as Sports Day.

The tug-of-war contest takes place on Sunday, October 13th on Highway 58 at the Kumoji Intersection in downtown Naha. Highway 58 in this area will be closed to vehicle traffic from 14:30 through 19:00. The contest begins with a ceremony at 14:45; speeches are given by dignitaries who address both teams, whom which are divided into East and West. Finally, representatives from both teams perform a series of martial arts demonstrations and flag performances to ramp up the crowd and emotions for the main event. At around 16:10 when all formalities have been completed, the two ropes, both about 300 feet long, are pulled together and linked with a 10-foot wooden peg called “Kanuchi”. When the gong sounds, the fun begins! 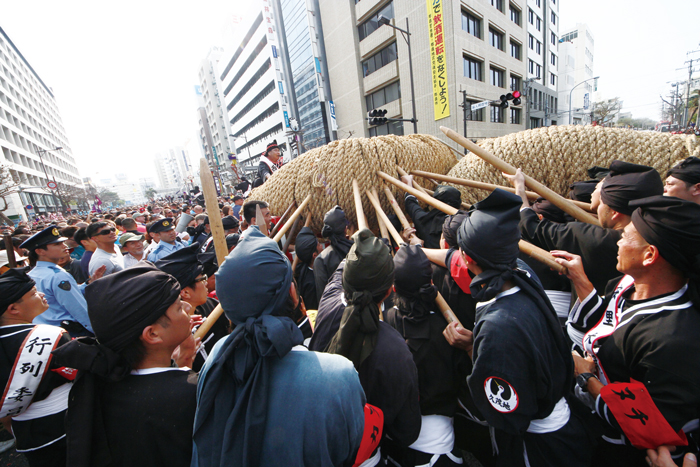 The Giant Naha City Tug-of-war. The largest festival in Okinawa with more than 280,000 people in attendance.

A crowd of some 15,000 participants will take to the east or west side. The goal? Teams must pull the entire rope, weighing in at 45 tons, for 5 meters in their direction. They have 30 minutes to accomplish this. Everyone is welcome to join in on the fun, but it is highly recommended to get there well in advance as crowds line up along the street waiting for the war to begin. It is estimated that 280,000 people attend every year to watch and/or participate.

If one side pulls the full 5 meters then a siren is sounded declaring the winner. If after 30 minutes and no one has won, the contest comes to a draw and they have to wait the following year to try again. Whatever the result – win, lose, or draw – people normally cut away pieces of the rope for good luck.

The Naha Tug-of-War has its roots dating back to the days of the old Ryukyu Kingdom. However, it was not held every year. It was only during important celebrations that the event occurred. In 1935, the tradition stopped altogether and would not continue until 31 years later in 1971. The year was chosen because it coincided with the 50th Anniversary of the Naha municipal government. It has been held every year since.

The entire festival portion will take place at Onoyama Park for all three days starting from 11:00 and ending at 21:00. There will be a live concert, karaoke contest, comedy shows, and an Orion Beer Paradise village – all broadcasted live on RBC (Ch.3).

On Saturday, October 12th, between 14:00 and 18:30, a citizen’s parade will occur on Kokusai Street and end at the open square in front of the Palette Kumoji Building. The parade will be accompanied by street performances, so all vehicle traffic on Kokusai Street will closed off from 13:45 to 18:30.

The parade often features various kinds of traditional, modern, and ethnic dances from other countries. Taiko drums, Eisa, and Shishimai (Lion Dance) are also part of the parade. About 50 local citizens’ groups stage bo-jutsu martial art performances at eight different points along the Kokusai Street and in front of the Palette Kumoji.

All events are free, but parking in the area is not, and can end up costing several hundred yen, depending on how long you stay. Nevertheless, this is a great opportunity to witness this stupendous event. Get yourself ready. It’s going to be a war!