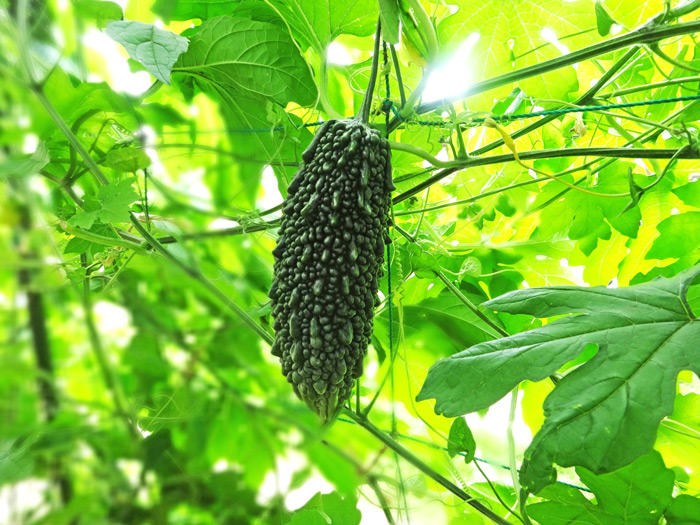 There are a wide variety of vegetables grown and consumed on Okinawa, a lot of which are unique to the island. In fact, a good number of Okinawa vegetables are such local specialties that many mainland Japanese have never seen or eaten them. In grocery stores and farmer’s markets all over the island, local Okinawan vegetables are known as “product of the island.” Examples include shima ninjin (island carrot) and shima rakkyo (island shallot), which have been produced locally and prepared in traditional dishes for centuries. 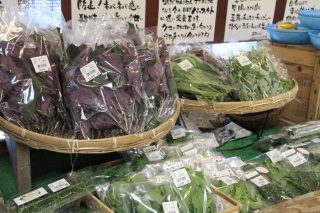 Because Okinawa has a subtropical climate with long, hot, humid summers, vegetables grown here have become accustomed to bright sunlight and possess a relatively high nutritional value. Also, green, leafy vegetables grown in the mainland are unable to thrive in Okinawa’s climate. As a result, in Okinawan cuisine, melon-like varieties such as goya (bitter melon) and nabera (spongy cucumber) have taken the place of the green, leafy vegetables more common to the diet of mainland Japanese.

Goya champuru—a stir-fry which typically includes bitter melon, egg, tofu, and/or Spam—is perhaps the best known local dish, and one that virtually every visitor will eventually encounter. Peak season for fresh, locally-grown vegetables is January through May. The Okinawan winter season features both shima ninjin and shima rakkyo. The Okinawan version of both vegetables differ significantly from their mainland cousins. The shallots are much shorter and thicker in appearance, while the carrots are yellow and slender.

Other vegetables harvested during the winter season 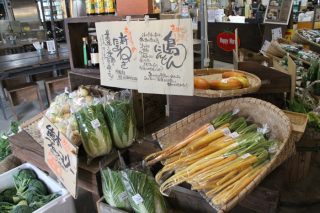 How to eat Okinawan vegetables:

Niyana is credited for having medicinal properties that reduce fever and alleviate cold symptoms. Mixing it with shima dofu (island tofu), white miso and peanut butter tempers the bitter taste.

Tanmu (taro root) is a quite popular tuberous vegetable during the winter months and is a must-have item at any New Year’s party dinner in Okinawa. A local dish called ringaku is made by boiling and mashing tanmu with sugar and a bit of ginger. It is a very popular dish with women and children alike.

Shimana is a local vegetable with leaves a little on the spicy side. This leafy vegetable is readily available at Okinawa grocery stores. Shimana leaves are packed in salt overnight, then washed, chopped, mixed with tuna and fried to create a dish called chikina, a popular home cooked Okinawan meal.

Shima rakkyo (island shallot) are usually harvested in spring. Peeled and served either salted or as deep fried tempura, they are a very popular snack while drinking beer or awamori. 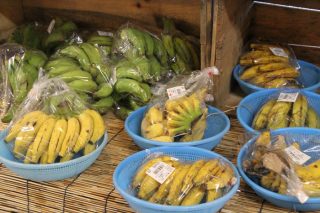 Okinawa also produces a large variety of fruits that don’t grow in the colder climate of mainland Japan. Fruits harvested in Okinawa include mango, shikuwasa (a type of green lemon), passion fruit, pineapple and more. Eaten raw, Okinawan fruit are often very sweet, but processed fruit is also quite popular. Perhaps the best place to find locally produced fruit, either fresh or processed, are local road stands called michi no eki, which dot the island along the main roads. In addition to fresh fruit, there are also a surprising variety of jams, juices, canned fruits and wine. It’s great fun to explore local markets to find all the unique, delicious fresh and vegetables grown here on Okinawa!