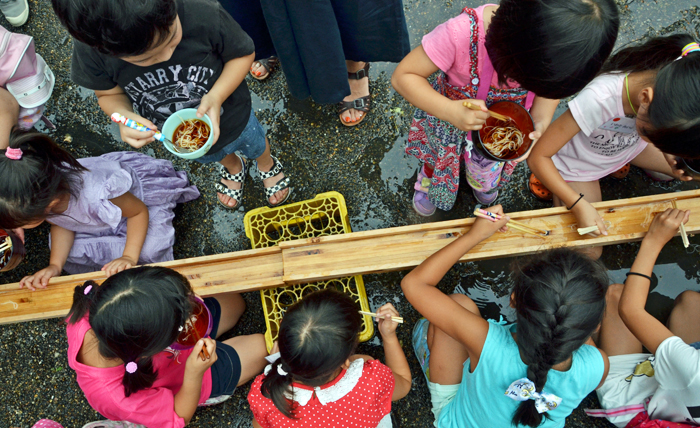 Hiyashi somen are thin wheat noodles served chilled with a tsuyu, a dipping sauce, especially during the hot and humid summer months in Japan. In mainland Japan, it’s specifically associated with “Tanabata” which is observed every year on the seventh day of the seventh month.

Tanabata is a folk tale of two lovers, Orihime and Hikoboshi or stars Vega and Altair that are allowed to cross the Milky Way only once in a year to be with each other. This somen noodles are said to resemble the Milky Way. 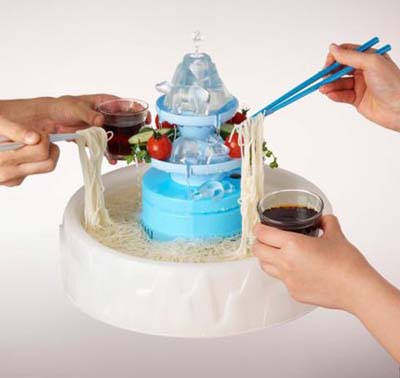 Nagashi Somen machine for home use.

Preparing hiyashi somen is very easy. Just boil the noodles, place them in a bowl with ice cubes to keep them chilled and eat dipping them in cold sauce (Tsuyu). Thin slices of fried egg, ham, and cucumbers are common toppings for this food that people of every age love.

There are many ways to eat this food. Especially at restaurants it’s often served over a bamboo basket. Many people like to add some leafy vegetables like salad on the top, while others mix it with sticky paste food, such as okra or natto (fermented beans).

A variation of the serving is often seen at outdoor festivals. It’s called “Nagashi-Somen,” in which a bamboo stalk is cut in half to make a gutter, and water and noodles are then poured streaming down the groove from the top. Catching noodles to eat is fun even though making the setup takes time and effort to prepare.

There are also Nagashi-Somen machines that are sold at home appliance stores. Some of them come with a fake bamboo groove, a swirl pool for the noodles, even a figurine of a miniature polar bear or a water slide. All those provide great fun for home parties.