Spring is here. And in Japan that means warmer weather, cherry blossoms, and rainy season. But, before the rainy season takes hold and shrouds Japan in a blanket of gray clouds and humidity, there is Golden Week which is providing a much needed respite for a nation infamous for its strong work ethic. Since its inception in the 1950s, the holidays encompassed in Golden Week have changed a bit over the decades, but presently include Shōwa Day, Constitutional Memorial Day, Greenery Day and Children’s Day. 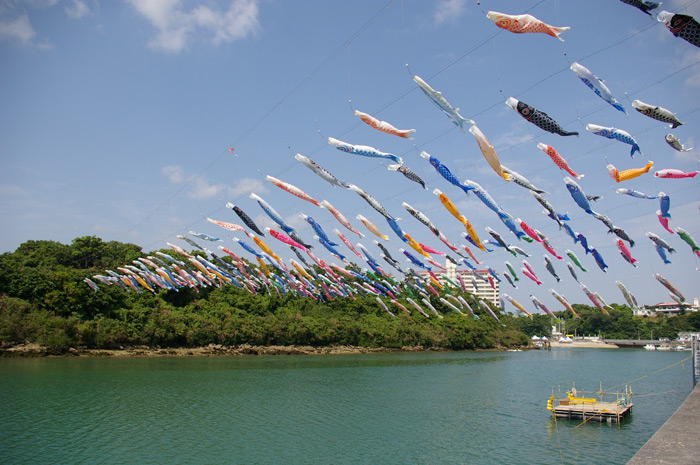 Colorful koinobori streaming in the wind at Hiya River in Kadena.

The term “Golden Week” was first coined because of the spike in profits experienced by many leisure-based industries during the long holiday. In post-World War II Japan, with the economy in shambles, the most popular leisure activity for the vast majority of the population was a day at the movies. In 1951, the film Jiyū Gakkō grossed more tickets sales during the holiday period than any other time of year. The increase in revenue prompted the then CEO of Daiei Film Co., LTD. to dub the holiday period “Golden Week.”

In recent decades, however, leisure during Golden Week is far less about movies and much more about travel. Throughout Japan government offices, schools and a number of private businesses shut down and workers and their families head to airports and train stations to kick off Japan’s busiest travel season of the year. The Japan Travel Bureau estimates that well over half a million people travel during Golden Week. Of course, a good number of these work weary travelers will make their way to the sun-soaked beaches and fun-filled festivals that take place all over Okinawa during the holiday period.

Here, we provide a synopsis of the historical and cultural background of each holiday in Golden Week.

Shōwa Day
Officially declared a national holiday in 2005, Shōwa Day is held annually on April 29th, to honor the birthday of Emperor Hirohito (Shōwa). Initially, the Emperor’s birthday wasn’t observed as a national holiday, but rather a national day of rest. Following Hirohito’s death on January 7th, 1989, April 29th became known as “Greenery Day” to symbolize the Emperor’s love of nature. Finally, after years of controversy and political disputes over Hirohito’s reign, a compromise was reached between Japan’s major political parties. In 2007, Greenery Day was renamed Shōwa Day, making April 29th an officially recognized national holiday; a day to reflect upon the six decades of turmoil Japan endured during Hirohito’s reign.

Constitutional Memorial Day (Kenpo Kinenbi)
As the name suggests, Constitutional Memorial Day marks the anniversary of the promulgation of Japan’s constitution, which went into effect on May 3rd, 1947. The day is meant to highlight the the significance of Japan’s post-war constitution, as well as the importance and meaning of democracy in post-World War II Japan. Indeed, on May 3rd many media outlets throughout Japan publish editorials and commentary on the historical significance of the three pillars written into the constitution: sovereignty of the people, pacifism, and a respect for fundamental human rights. The National Diet Building is open to the public on this day, allowing the general public access to the site where the constitution was signed, providing an opportunity to reflect upon how the document has impacted generations of Japanese citizens over the past 70 years.

Greenery Day (Midori no Hi)
Following the declaration of Shōwa Day as a national holiday, the aforementioned Greenery Day was moved from April 29th to May 4th. Originally celebrated on Emperor Hirohito’s birthday, Greenery Day is now celebrated as a day to connect with nature and provide thanks for its many blessings. On this day, thousands of trees are planted throughout Japan as a way to honor nature and offer a return for her bounty.

Children’s Day (Kodomo no Hi)
May 5th is Children’s Day, the final holiday of Golden Week. This particular holiday dates back to ancient times, although it’s origins are unknown. Originally known as Tango no Sekku (Boys Festival), the day exclusively celebrated boys­­. Girls also had their own day known as Hinamatsuri (Dolls’ Day), which was celebrated a few days earlier on May 3rd. Modern sensibilities, however, demanded both sexes—as well as mothers—be given their due respect, so the name was changed to Children’s Day and became an officially sanctioned holiday in 1948. 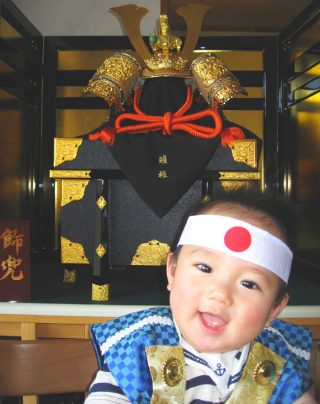 On this day, koinobori (carp streamer) flags are flown in family homes all over Japan. Koinobori are meant to represent the strength and tenacity of carp, which, according to traditional lore, swim upstream to become dragons, overcoming a number of obstacles along the way. The carps’ might and determination are attributes desired among sons, as these traits best represent the courage and ability necessary to conquer one’s goals in life. A family will fly one larger koinobori for the father, one for the mother, and smaller ones for each child.
Although it’s merely a coincidence the four holidays of Golden Week all fall within days of each other, the week long holiday provides a much needed and long anticipated break for a country that is notoriously over-worked. Yet, Golden Week, much like long holidays in West, is a hectic time of year filled with traveling, festivals, family reunions, and other events too numerous to list here.

Of course, many people choose to stay home during the holidays in an effort to avoid the crowds. But for visitors to Japan, Golden Week provides an excellent opportunity to experience Japanese culture and attend events and festivals that only occur during this time of year. And, as each region of Japan celebrates the various holidays in it’s own unique way, the possibilities are endless. So, during the upcoming holiday season, be sure to get out and experience a unique cultural experience that can only be found in Japan during Golden Week!