There’s a new bench leader for the Basketball Japan League champion Ryukyu Golden Kings, and he’s preparing to fire up his squad for the coming season. 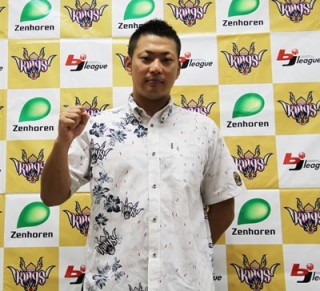 Kohto Tohyama takes the reins of the Golden Kings after a couple of seasons with the 8th place Miyazaki Shining Suns and a two-year stint as an assistant at the Higashimikawa Phoenix. He’s bringing to Okinawa a new perspective, and new objectives calling for his players to be Passionate, Energetic and have Spirit. “The Kings already have the attributes,” says Toyama, “but I think they can do more, and have potential.”

The 29-year-old head coach says his goal is “to make the most exciting team and playing style in the league. It’s for the boosters, teams and for basketball.” He began his coaching career in 2005 with the Japan Basketball League OSG Phoenix as an assistant manager. He moved up to OSG Phoenix manager before making the switch to the Higashimikawa Phoenix.

An Eastern Conference coach says the Golden Kings management made a “bold, inspired choice” in replacing head coach Dai Oketani, who had led the team to a pair of BJL championship rings, calling Toyama “a guy with potential to be an excellent coach.” Others say they’re not as sure, asking the hypothetical question “why break up the chemistry of a proven winner?”, “How will Jeff Newton and the rest of the reigning championship squad respond to the change?”, and “will the team be aggressive this fall or will Tohyama and the Golden Kings go into a rebuilding mode next season?”

Tohyama says he’s coming out strong. “My goal with the team is to develop the team into one that is faster, more aggressive, hotter and stronger,” he says. He’s predicting boosters will be impressed with the streamlined style of play he plans on introducing to the Golden Kings. Will it work? Tohyama says yes, and invites the Okinawa fans to “come and feel the excitement and Golden Kings passion” that’s going to be on the court this year.