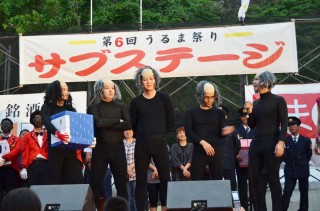 An Okinawan wedding party is special.  While weddings in mainland Japan tend to be very formal affairs with endless speeches and carefully choreographed appearances, in Okinawa, although speeches are held here, too, the new couple’s friends and colleagues always prepare a show that often is quite entertaining.

The performing groups include coworkers, family members, classmates from schools, and friends of both from bride’s and groom’s side. Although all performers are amateurs, the level of performances could be quite high and entertaining. The performers want to impress not only the bride and groom, but also all audience attending the party.

But the etiquette in all ceremonies requires just two things. The first performance of the ceremony should be an Okinawan traditional dance called “Kagiyadehu” that is a celebratory dance dating back to the Ryukyu Kingdom era. Female family members or relatives usually perform it. The other one is a dancing “Kachashi” with everybody joining in at the end of the party. “Kachashi” is also an Okinawan traditional dance expressing happiness. Okinawan people dance Kachashi everywhere where there is fun time and Sanshin playing.

After “Kagiyadehu” there are the mandatory speeches from guest speakers, but then the entertainment show starts. That’s when awamori and beer starts flowing and the party gets going. As you can imagine, the Okinawan wedding ceremony is a warm and very happy occasion.

Mainland Japanese often commend that the Okinawan wedding party is so powerful and fun! It’s really different style from mainland.

High level amateur performers gather to the contest to compete. A jury grades the performances taking into account not only the level of the performance, but also how the audience warms up and how much fun they have.