“Hajiti” means nudging with a needle, a decoration Okinawan women used to tattoo on the back of their hands in the past. It was also a symbol of their status in society.

The technique’s long in the history books, but the saga behind it is resurfacing as young people study more about Okinawan history.  The tattoo was done to a woman as a symbol of coming of age when she got engaged to be married. 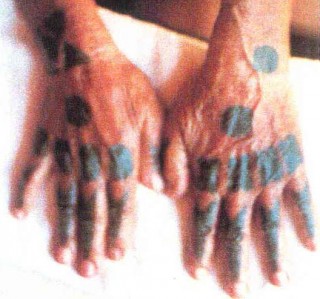 Hajichi tattoos on the back of women’s hands were a sign of their status in the society.

The tattoo was done using bamboo sticks to insert a mix of ink and awamori under the skin.

An artist who applied the ink was called “Hajitiya.”  The design patterns were different in different regions but consisted of mainly three elements; an arrow-head, a circle and a square.  The arrow-head means “never come back” like an arrow that is shot is never coming back, and so did the daughter marrying into another house. The circle is a symbol of winding a thread, and the square means a sewing box. A woman in those days could not marry before she knew how to sew.

The practice was outlawed by officials

from mainland Japan during the Meiji era, probably because it was considered aboriginal and uncivilized, and according to some researchers as means to restrict the influence of female village head priestesses and strengthen the power of the civil servants.

According to old books, if the woman belonged to a very high class, she had plenty of clue tattooing on her hands while low class women had much less.  Only very few very old women are still alive who have hajiti tattoos on their hands, and in a few years the last few will also pass away.

Like many indigenous people, the Ainu and people of Okinawa, formerly the Ryuku Kingdom, have a history of tattoos. Traditionally, Ainu women bore tattoos around their mouths and on the backs of their hands as a sign of beauty and adulthood. But after the Meiji government unilaterally declared Hokkaido to be part of Japan, giving it its current name, the government began an assimilation policy and prohibited various Ainu traditional practices, including tattoos.

In Okinawa, women had tattoos on the backs of their hands that were said to be a sign of adulthood and a talisman to ward off evil. But following the end of the Ryukyu Kingdom and the establishment of Okinawa Prefecture under the Meiji government in 1879, tattoos were also banned in Okinawa.

Why did the Meiji government ban tattoos?  The government officially banned tattoos because they were deemed barbarous and unsuitable for the “civilization and enlightenment” movement. Also prohibited were men and women bathing together in public bathhouses and walking around in the nude or naked from the waist up.

For more than 70 years, tattoos were banned. The ban was lifted in 1948 during the Allied Occupation.