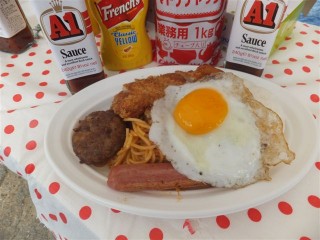 This simple meal created by drive-in restaurant Hawaii from Motobu was voted the best A-lunch in last year’s contest.

The Koza A-lunch Competition in 2011 was so successful, the organizers are doing it again this weekend, holding a two-day competition to pick the best restaurants in the area, and they’re looking for you and others like you to do the judging.

The Koza A-lunch Championship Contest will be held this weekend on Saturday and Sunday from 10 a.m. to 5 p.m. at Koza Sports Park, Moromizato, Okinawa City. Admission to the contest is ¥1,000, which includes five food tickets to pay for the samples.

Some 20 restaurants, all of which are offering original A-lunches, will be competing in the hall.  Visitors compare tastes and decide the Grand Prix winner by their vote.  This year’s event even has television promotion, which is expected to boost advance ticket sales.

Last year’s winners were Drive-in Restaurant Hawaii, Sakimotobu, Motobu City, which took the A Grand Prix, and the Mexican and Steak House Lima Restaurant on Moromizato in Okinawa City.  The C-Grand Prix went to Olive Batake from Awase, Okinawa City.

Organizers are turning to sports to draw attention this year, too, being linked with the FC Ryukyu 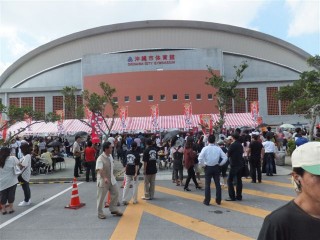 The new Okinawa City Gym is the venue for the contest.

soccer team is expected to attract a good many visitors.  They’ve also hooked up with Japan Transocean Air, plus links to Okinawa City sightseeing, which will include visitors from outside the prefecture.

An estimated 20,000 meals will be prepared for the two days, served by the food corners, eating-and-drinking spaces, stores and the Okinawa City specialty corner.  Throughout the event the home game by FC Ryukyu will be telecast on a large screen.  The second date, highlights of the soccer team’s season will be broadcast.

Parking is limited, and organizers encourage visitors to park in the outlying areas and take the shuttle bus.  The Koza Sports Park is located just off the Expressway Okinawa Minami (Kadena) exit. Parking in the area is limited, but the venue is within easy walking distance from the Kadena USO and Gate 2.