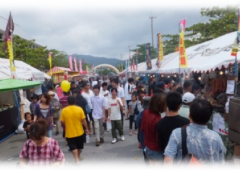 Yambaru Fair exhibits merchandise and produce both in and outdoors.

The Yambaru Industrial Fair in Nago’s 21st Century Forest Gymnasium will be held for the 28th time this year over the weekend.  Yambaru is the area comprising the northern part of the island including Nago City.

The festival’s rather original motto is “Hop! Step! & Jump! We show the set of Yambaru power ~ locally produced for local consumption, and going global.”

Organizers say the theme of the event is Yambaru in autumn. The festival showcases an exhibition and spot sale of Yambaru specialties, such as awamori and fishery products. Many specialty shops representing produces and businesses outside of the prefecture will also be present.  Various stage events are providing entertainment to visitors. 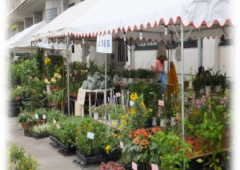 Locally produced farm and fishery products are the focus of Yambaru Fair.

Parking at the 21st Century Forest Gym area is limited, but free parking is available at the Nago Fishing Port. A free shuttle bus will take visitors to the venue.