A hostess explains the company line of different awamori at Zuisen showroom in Shuri.

Awamori is Okinawa’s indigenous beverage, distilled for centuries at the behest of the royal families and continued to this very day, where it’s the crown jewel of Okinawa’s alcoholic drink of choice.  So appreciated it is that it even has a dedicated day of it’s own, and that happens to be today.

Okinawa’s awamori is also referred to as ‘island sake’ or ‘shima-zake’ or shima, for short.  It is made 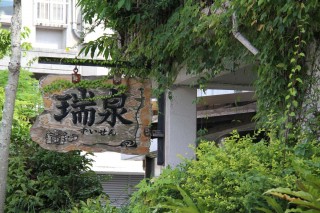 from rice, and is a product of distillation, as opposed to brewing (Iike Japanese sake).  Originating from the Thai drink lao lao, the beverage made its way to Okinawa in the 15th century, and Thai-grown rice is still used in its production today.  Okianwans have, of course, refined the distillation process, incorporating various techniques from nearby countries, making it more suitable for the subtropical climate.

More importantly to many, Okinawa’s awamori incorporates the unique local black koji mold in fermentation, giving it its unique mellow flavor.  Black koji mold is also indigenous to Okinawa.  Awamori’s typically 60-80 proof, or 30-43% alcohol, although some export brands shipped to mainland Japan and overseas are increasingly 50 proof, 25% alcohol.  On the other extreme, some brands including Hanazake from Yonaguni island, are 120 proof or 60% alcohol. 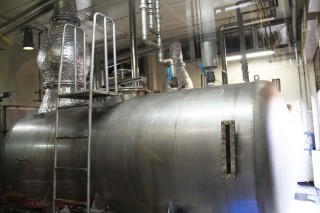 Awamori’s age improves flavor and mellowness, and also the price.  Aged three years or more, it’s called kusu, or old liquor.  Good awamori is aged underground in constant cool temperatures in clay pots or vases, and are often found in the caves of Okinawa.

Zuisen Awamori distillery, formerly known as the Kyan brewery or Sakumoto brewery, is one of the island’s best known awamori producers, established May 1, 1887.  In ancient times, the Ryukyu government allowed only three areas to brew awamori: Sakiyama, Akata and Torihori, all of which are located in the Shuri Castle area.  Zuisen, one of the oldest, is in Sakiyama district. 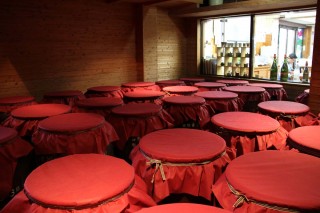 Awamori is aged in large jars.

Zuisen, of course, has its own opinion.  Its name stems from spring water of Shuri Castle.  There is a spring near the second gate of the Shuri Castle, where the water was called Zuisen, and was said to be good, pure water.

Zuisen produces more than 50 kinds of awamori, with Usaki awamori being one of the more unique.  Usaki is carefully processed with the fermenting black rice malt, which each distillery keeps careful watch over.  Most of it had disappeared during the World War II, but is back thanks to preserved black rice malt at Tokyo University.  Now it’s readily available and the taste is mild and smells like fruits.

It was only 13 years ago that the priceless black yeast was found to still exist at the university.  It turns out that 19 types of black yeast samples from 14 distilleries still existed in the university’s Cellular Biology Research Laboratory.  That spurred the Zuisen staff’s interest, as it had stopped cultivating their own yeast, instead contracting commercial cultivators to mix different kinds for awamori production.  The discovery brought new excitement to Zuisen, which used prewar methods like steaming rice by hand, and keeping a 24-hour vigil over the fermentation process.  It paid off, and the Usaki was created.

The Zuisen facility is still located at Sakiyama in Shuri, a district of Naha City.  It’s facilities are open to the public weekdays from 9 a.m. ~ 5:20 p.m., and also on the first and third Saturdays.  Zuisen is closed on Sundays and Japanese holidays.

The hanazake awamori, literally translated as ‘flower liquor’ with its 60% alcohol content, is a product of three distilleries on Yonaguni, Japan’s westernmost island.  Donan, Yonaguni and Maifuna produce the beverage, which is traditionally consumed straight.

That’s different from most awamori, which is traditionally served with a bucket of ice and a pitcher of water.  In fairness, a small percentage of awamori drinkers bend a bit toward the hot awamori, served up similar to Japanese sake.