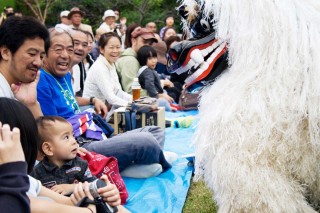 Shishimai (Lion Dance) and other folk entertainment is staged at Shikinaen Garden on Sunday.

The 14th Friends of Shikinaen meeting is coming up Sunday, as hundreds of Okinawans gather to salute the World Heritage Site on Okinawa.

Designated as a World Heritage special scenic spot, “Shikinaen” is the pride of the Mawashi area of Naha City.   The grounds are often used for traditional performing arts by youth organizations and cultural groups.  The Friends of Shikinaen citizens’ group is organized to promote traditional culture in the Mawashi area, creation of new culture, healthy training of youth and activation of the area, and education of, and preservation of cultural properties.

While dance performances centering on the traditional performing arts are popular when hosted by young students of the Mawashi area, an experience corner and an opening-a-shop corner are also prepared. A photo exhibition will also be held at the Sunday event, which runs from 11 a.m. ~ 4 p.m.  Admission is free.

The gardens of Shikina-en are located on a small hill to the south of Shuri Castle in Naha.  The gardens were laid out in 1799 to embellish one of the residences of the Sho family, rulers of the Ryukyu Kingdom.  They were used for the reception of an envoy from China the following year. The residence and its gardens are also known as Shichina-nū-Udūn (シチナヌウドゥン?) or Southern Gardens (南苑?), as opposed to the Eastern Gardens or Uchayaudūn, laid out on a small hill to the east of Shuri Castle in 1677.

The stroll garden features a pond with two small islands; a Chinese-style hexagonal pavilion; other pavilions with red tiles, the use of which was reserved for the upper classes; Chinese-style arched bridges; and seasonal plantings of plum, wisteria, and bellflower.[