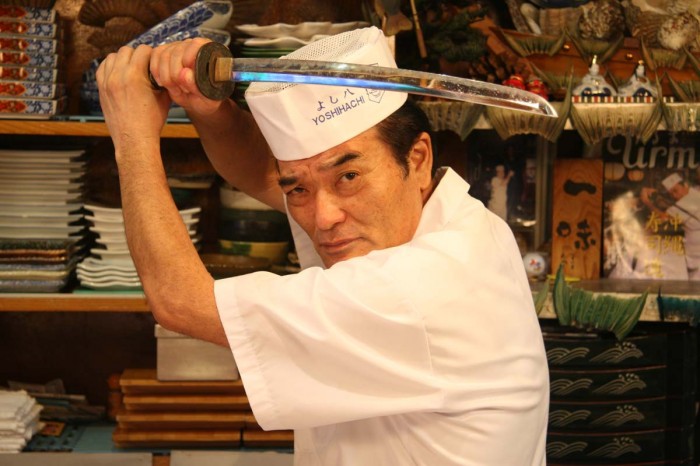 Yoshi Maekawa takes his trademark posture with his samurai sword.

Sushi Bar Yoshihachi, one of Okinawa’s best known sushi restaurants among Americans in Chatan town is celebrating its 20th anniversary on November 14th.

The restaurant, considered famous by many patrons who’ve returned repeatedly over the years, 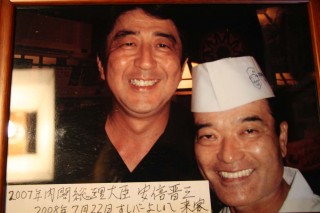 and favored by not only local Okinawan customers but also Americans from kids to VIPs, is reaching out to bring everyone together for the anniversary celebration.  Yoshihachi’s owner reminisces about past patrons that include U.S. military commanders on Okinawa, overseas actors, Japanese comedians, and top athletes.

In July this year, the new President of the Liberal Democratic Party of Japan, Shinzo Abe, visited Yoshihachi, enjoyed a dinner at the restaurant and a chat with the affable owner, Yoshi Maekawa. To prove the point, the walls in Yoshihachi are decorated with photos and certificates of approval from a lot of people from all walks of life. 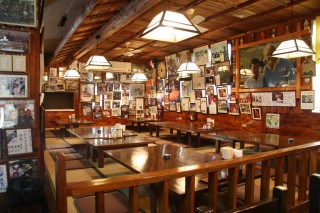 Walls are plastered with photos of customers and events through the years.

Why is the restaurant so popular? The answer is its unique and professional owner and sushi chef Yoshi Maekawa. He says that his first concern is always how to satisfy and make his customers to enjoy their dining experience.

Maekawa then moved to the U.S. to find out what kind of sushi dishes would be popular among American diners. He moved around in America and worked in places like New Orleans, New York, Chicago, Los Angels and other locations preparing and learning sushi making for 12 years.  While in the U.S. he came up with the Sushi Tempura Roll in 1982 that became his trade mark.  That lead to other roll sushi dishes like the tuna teriyaki roll, young yellowtail roll, shrimp tempura roll, and more.

Maekawa moved back to Okinawa, and opened Sushi Bar Yoshihachi on Nov. 14, 1992 with his new ideas that had proven so successful in the U.S.

Here he continued coming up with new sushi, using local ingredients, such as the Beni-imo Roll, a sweet potato roll, which he has officially copyrighted as his invention.  Currently, Yoshihachi’s most popular dishes are the Beni-imo Roll and Soft-shell Crab Roll. Lately, Maekawa personally recommends blowfish (fugu) dishes including sushi, sashimi, tempura, blowfish tempura roll, and more.

“The blowfish that we serve are really fresh, and mouth-watering tasty!” Maekawa says. All blowfish served in Yoshihachi are caught from the ocean around Okinawa Island. That’s why they are really fresh and tasty.

“Of course other ingredients of our sushi are fresh and tasty, too” Maekawa adds. As an appreciation for Yoshihachi’s 20 years anniversary, they will serve all soft drinks for free from Monday through Thursday during the month of November.

They have also set a discount price for a bottle of Awamori bottle for the same period at \1,200 per bottle.

There are also three separate party rooms, for 40, 25 and 15 people, and there are tables for physically challenged customers, too. Parties are welcomed, and an appointment can be made by calling 098-936-2359. Free parking is available only meter away from the restaurant, and additional free parking space is at near-by “Nirai Center”, although its parking will be closes at 10:30 p.m.

Yoshihachi is open 4:30 to midnight with the last order at 10:00 p.m., but if there are no customers in the restaurant, they could close a little earlier. An early arrival is recommended.  Yoshihachi closed on Tuesdays. Yoshihachi accepts dollars and yen, but no credit cards.

To get to Yoshihachi go out of Kadena AB Gate 1 and turn left at the second signal, go uphill on Kokutai Street and turn right at second traffic light next to Chatan police box, then go straight and you can find the restaurant on your right. The parking is 10~20 meters further.