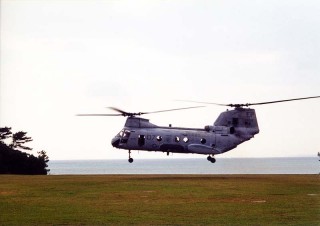 Marines have withdrawn 12 of their CH-46 helicopters from MCAS Futenma are replaced them with 12 MV-22 Ospreys, Tuesday.

The U.S. Marine Corps completed the withdrawal of a fleet of 12 CH-46 helicopters from its Futenma air station in Okinawa Prefecture, southern Japan, on Tuesday to prepare for the start of full operations of 12 MV-22 Osprey tilt-rotor aircraft deployed at the base in Ginowan City.

There are 12 more CH-46 helicopters at the Futenma base, and they will be replaced by another 12 MV-22 Ospreys scheduled to arrive in summer 2013.The 12 Ospreys now at the Futenma base arrived in early October.  Ginowan Mayor Atsushi Sakima told reporters that the city will continue to demand that the U.S. military reduce noise from the Ospreys and that the aircraft adhere to the flight routes agreed upon by Japan and the United States. He also said local residents hope that the Osprey deployment will be reviewed.

Despite persistent concerns in Japan over the safety of the Ospreys following a number of crashes, the U.S. military has maintained that the deployment will contribute to the U.S.-Japan alliance.  The aircraft is twice as fast as the CH-46, has a four times larger combat radius and can carry double the number of personnel. The 12 Ospreys now at Futenma are set to conduct low-altitude flight training above Japan’s main islands using the U.S. military’s Iwakuni base in Yamaguchi Prefecture, western Japan, and Camp Fuji in the central prefecture of Shizuoka as base facilities.

The aircraft are also slated to fly to the U.S. Atsugi base in Kanagawa Prefecture, south of Tokyo.