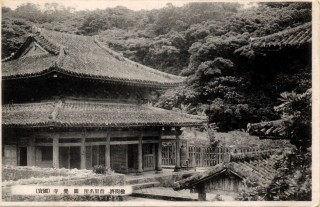 Eikakuji temple in Naha was among many destroyed in the war.

It’s said that Buddhism was introduced by visiting monk Zenkan to the Ryukyu Kingdom around 1265~1274, an action that appears to have brought the temple of Zen Buddhism’s Rinzai sect.

From there, the Shingon sect joined forces and established itself in the area with Naha as home.  It’s a long history, and now the Naha City Museum of History is offering a presentation through December to help people appreciate the role of shrines and temples in Naha City.  It explains the shrine, which deified the gods of Japan, including Kumano avatar and Sun Goddess, and carries through the painful period in 1879 in the Ryukyu Kingdom.

That era exposed many temples and shrines to a crisis of continuation, some of which were ultimately burned down by the Battle of Okinawa in 1945.  The presentation also explores the post-war reconstruction during which Buddhism and Shintoism descended into the island chain.

Under the auspices of the Naha Municipal Board of Education Cultural Assets Division and the Naha Historical Museum, the corporate planning exhibition ‘God and Buddha’, which shows the shrines and temples, the ancestors of Naha worship and Buddhist entitlements in the old kingdom’s capital.  Together the agencies have assembled ancient documents and excavated items, which create a fascinating insight into the past.