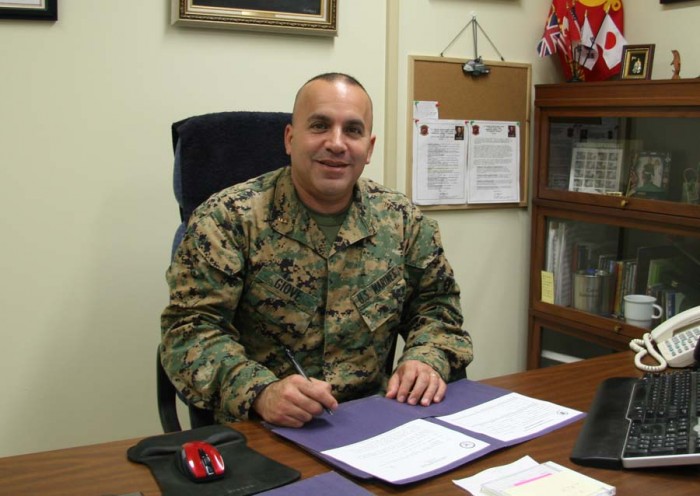 CWO Stephen B. Giove, the leader of the III MEF Band, believes that music is a key to make friends among people of different nationalities and cultures.

Stephen B. Giove is a pianist, a drummer, and a master musician now leading the III Marine Expeditionary Force Band.

After he graduated from the Berklee College of Music, he worked as a freelance drummer for a couple of years, and then chose a challenging career path, joining the U.S. Marines in 1989, using those musical skills to work his way to Chief Warrant Officer and posting to Okinawa in 2010 as the III MEF Band officer-in-charge.  He says music, people and his military duties as a Marine are all he needs to be happy.  “I can do all of that every day,” says Giove, adding that his present job fits him “to a T”.

The III MEF Band performs more than 300 times per year, with an average 10 overseas concerts, too.  The band just returned from performances in Korea, and are now getting ready for a busy spring and summer.  Giove is ecstatic about being around Okinawan people, who he notes “take pride in their culture, and of showing it.”  That makes him feel good as he stays involved in the local communities, as well as with the Japan Ground Self Defense Force Band, Seika Girls High School Marching Band, and others.

He and the band are looking forward to the Okinawa City Street Parade, Ryukyu Festival and performances at the Okinawa Convention Center for Okinawan audiences.  On top of that, Giove was the man behind the III MEF Band Festival to enhance relationships with high school students last February.  He calls focusing on relationships through music is to let Okinawan people know what kind of a people the Marines are.  “At the moment, the political situation is very fragile,” he explains, “so for this reason I want them to know about us and make the m happy through our performing music.”

That’s not always simple, Giove points out.  “That’s a big challenge, but we should be doing it.  When we cannot understand each others’ language, Japanese and English, we are able to communicate and make friends through the music.”  The career Marine officer is proud of his military service, noting his band members all go through intense combat arms training, making them mixtures of powerful specialists who focus on music while serving their nation’s military.  He likes watching his young Marines make friends through music, and says he always hopes the band members enlarge their circle of friends through music.”

The III MEF Band has built a spirit of professionalism, and with their finely honed sense of duty, was chosen as the Marine Corps band of the year for 2012.  It’s all a part of his responsibility, leading the band on trips to Asian countries as a Musical Goodwill Ambassador of the United States.  The acclaim they receive makes him proud.  “Music is a very powerful tool to make friends,” Giove says with a smile.  “Music is the international language.”