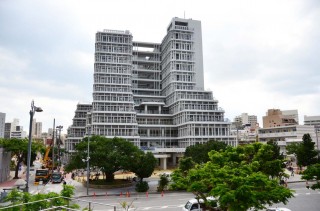 The new Naha City Office stands on the same spot as its predecessor.

It’s not exactly what the city fathers had in mind when they began planning for a new Naha City Hall and Office Building, but it’s what came about after they discovered the coffers weren’t deep enough to build what they really wanted.

What they really wanted was a shining office building on the hill; Omoromachi, to be exact.  Naha City had the land, but not enough to fund construction of the dream building.  Instead, the city resorted to selling the land to developers and moved ahead with plans for a new building in downtown Naha on the site of the old City Office, which, of course, had to be demolished first.

The 12-story, reinforced concrete building implementing state of the art technology, including barrier-free design to accommodate the handicapped, and the latest information technology, opened to the public last week.  It’s official completion ceremony took place two weeks earlier.  Some 1,500 city employees will work in the new building, serving hundreds of citizens who’ll visit the facility each day to deal with a myriad of issues.

The building has 12 above ground stories, as well as two basement levels.  Parking, always a problem in Naha, is mitigated with 230 spaces for cars, 120 for motorbikes and another 120 spaces for bicycles.  The entire building, including parking garage, is managed by computers, including a plotting board that tracks license numbers and keeps track of how many cars are in the building.  Parking charges are ¥100 per hour.