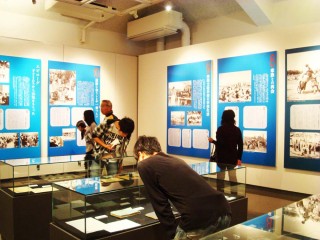 A five-month Himeyuri Peace Museum Exhibition chronicling accounts of the final days of the Battle of Okinawa, and the experiences of Himeyuri students who survived the period, will remain open until March 31st.

The exhibition is based on accounts of a handful of ex-Himeyuri students, as recorded on “the collection of Himeyuri peace prayer scientific library data 5.”  The 13-panel show exhibit demonstrates the students’ struggles during the last stage of World War II and the Battle of Okinawa.

Almost all Himeyuri students thought that they had to die before being caught by U.S. forces because, if they were to get captured by U.S. forces, they would be raped and then killed. This is the main reason why many of them committed suicide.

Even those who survived had feelings of regret or guilt, in spite of having survived.  After being sent to internment camps, through a hospitalization in a U.S. military hospital, followed by service in the military hospital, certain feelings were solidified.  A certainty was to become a teacher at the elementary school in an internment camp, or working in an orphanage.

The exhibition walks visitors through the hard parts, which include meeting bereaved families, but also allowed them to draw energy from surviving children and motivated some to live positively.

The exhibition shows not only the negative side of war, but the positive side of surviving, regardless of circumstances.

In addition, the cenotaph called Himeyuri Monument stands in the site. Many worshippers visit this cenotaph as what symbolizes the severity and misery of Battle of Okinawa.