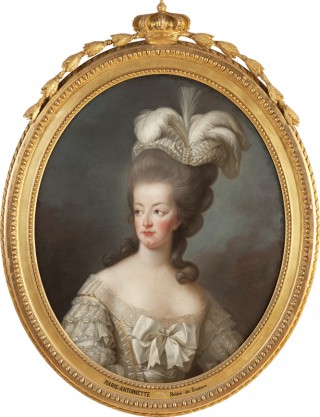 Queen Marie Antoinette was the most famous queen in the history of France, and she’s the sole topic of an exhibition at the Okinawa Prefectural Museum.

The Marie Antoinette Exhibition begins February 8th at the Okinawa Prefectural Museum, and runs through April 14th  (Closed on Mondays, except Feb. 11th and Apr. 1st, 12th is closed)  The exhibition will explain everything about Queen Marie Antoinette, who was married to the Bourbon house, which is the French royal family, from the Habsburg house of the Austrian empire.  She attained importance at age 14 and became a queen at 18.

Blessed with good looks and dignity, it’s been said she was understood by the revolutionary wave at age 37.  This exhibition features details of the life of Antoinette, who worried as a mother and wife, and whose last moment was firmly distracted as a woman despite leading the court life of a queen.  The exhibition focuses on the “beauty” which is represented by the refined lifestyle and the fashion in which she lived and loved.

Once loved, Marie Antoinette came to be disliked, and even despised by her French countrymen who believed she spent too much time catering to Austria, her home country.  Her husband Louis XVI was deposed and the monarchy was abolished on 21 September 1792; the royal family was subsequently imprisoned at the Temple Prison. Eight months after her husband’s execution, Marie Antoinette herself was tried, convicted by the Convention for treason to the principles of the revolution, and executed by guillotine on 16 October 1793.

Approximately 120 pieces of precious historical records, belonging to Musée Carnavalet, the Napoleon Foundation and French noble families who had a connection with Antoinette, are shown at the exhibition, which contains their family treasure inherited from generation to generation, and helped spin the tale of Marie Antoinette.  The atmosphere of the era can be felt by the space created at the museum, with some images of the Versailles Palace and 5 reproduced dresses of our favorite Antoinette.