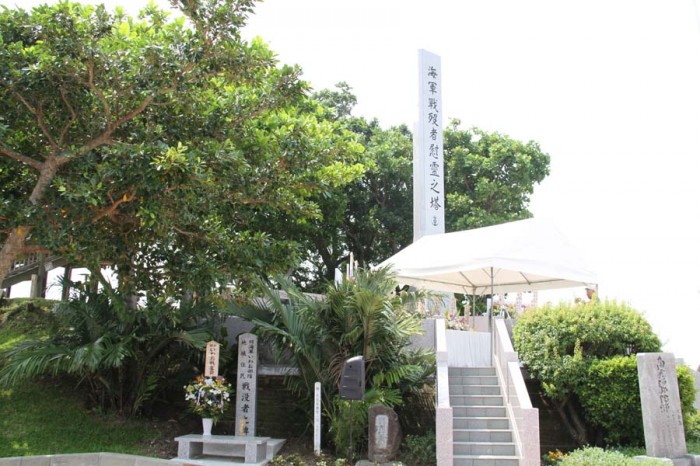 A memorial monument stands on Oroku Hill atop the Japanese Imperial Navy Underground Headquarters in Naha.

A careful walk down the narrow winding steps from atop an Oroku hill to the tunnel maze sets the hairs on end.

History is chronicled in many ways, and the stark images of the tunnel complex of the Japanese Navy Underground Headquarters offer vivid, chilling memories of the Battle of Okinawa’s last day.  June 13,1945.

Some 2,400 Japanese military personnel under command of Rear Admiral Minoru Ota were in 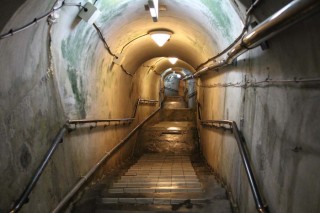 Steep stairs lead from the entrance deep into the hill. 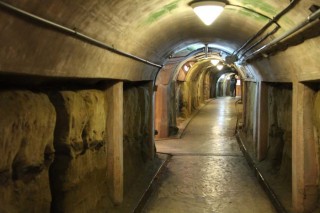 About 300 meters of the tunnels are open to the public. 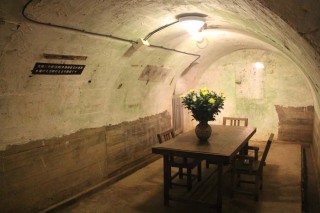 The no frills commander’s room.

the bunker complex just south of Naha, receiving reports of a pummeling of their forces by advancing Sixth U.S. Marines.  Ten thousand Imperial Navy fighters were deployed to Okinawa, and as the fighting became more intense, half were shifted to the north, to help defend the Shuri region north of Naha.

The precipitous situation was made worse in late May, when the 32nd Army Headquarters directed the Japanese Navy to abandon its well fortified base in Oroku, and move further south away from the attacking American forces.  The Itoman area fortifications were anything but, and Admiral Ota gave an okay for the men to return to Oroku for a last stand against the overwhelming American forces.

In the bunker, Admiral Ota realizing the end was near, sent a final message to his boss, the Vice Admiral, commending the Okinawans for their spirit and support, and acknowledging they’d not been always well treated by his Japanese counterparts.

What followed was Japanese custom.  Admiral Ota, together with his men, committed suicide inside the tunnels.  Bullet holes and shrapnel marks from exploding hand grenades bear testimony to the grief as the Japanese seamen went to their honorable deaths.

Walking the 300 meters of tunnels open to the public, a visitor gets a sense of the foreboding, the cramped quarters of a military fighting for survival.  Two-thirds of the tunnel complex opened to the public in 1970, including the Commander’s Room, Signal and Codes Rooms, and the Staff Room.

Impressively, many of the key tunnel elements are explained in English as well as Japanese.  There is a museum on the first level, before visitors descend to the tunnels themselves.  A Memorial Monument sits atop the Oroku hill beneath which the tunnels await.

Travel south on Highway 58 through Naha. After passing Onoyama Sports Park, turn left on Highway 7 and proceed approximately six kilometers.  Signs marking the Navy Underground Headquarters are plentiful.  The site is 20 minutes from Naha Airport by taxi. By bus from Naha Bus Terminal, take line 33, 46 or 101.  Get off at Tomigusuku Castle Park.  An easy ten-minute walk gets you to the Headquarters.