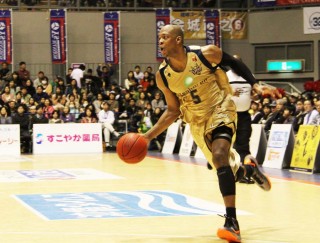 Anthony McHenry took the lead to restore Kings’ honor Sunday after a shocking Saturday loss to the Iwate Big Bulls, as the Kings redeemed themselves with a 99-67 win on Sunday.

Dai Oketani had led the Golden Kings to four terrific seasons that included four Final Four appearances, two league championships and a 147-59 record during his island tenure before moving to coach the Iwate Big Bulls.  Their first encounter saw the Golden Kings lead through most of the game, only to have Iwate outscore them 30-11 in the final quarter.

Terrance Woodbury headed up the Kings effort with 21 points, while teammates Naoto Kosuge and Narito Namizato each had 13.  Morihisa Yamauchi provided another eight for Okinawa.

Okinawa didn’t take kindly to the loss, bouncing back Sunday with a 99-67 shellacking of the Big Bulls.  Anthony McHenry took charge of the revenge, leading the Golden Kings to a 29-9 record with his 27 points, 14 rebounds, nine assists and three steals.  Narito Namizato popped in 18 points while Morihisa Yamauchi had 12 and Dzaflo Larkai and Jeff Newton each had 10.  Iwate is now 26-14.

Elsewhere in the BJL, the Oita HeatDevils upended the high-flying Yokohama B-Corsairs 73-67, improving to 13-27 with the effort.  The loss dropped Yokohama to 26-12, one game behind Eastern Conference leading Niigata.  Oita, one of the league’s original six teams, almost collapsed due to financial problems earlier this season, and was able to put nine players in uniform for Sunday’s game.  In the first of their two-game series, the B-Corsairs won 80-62.

The Chiba Jets split their weekend series with the Shiga Lakestars, losing the first game 77-76 in a nail-biter, but bouncing back 95-76 Sunday afternoon to run their season record to 20-18. The Lakestars are 25-14, while Chiba’s 20-18.  The Lakestars now take a bye-week, returning to action March 23rd against the Hamamatsu Higashimikawa Phoenix.  The Osaka  Evessa needed overtime to get the job done, but they did it, not once, but twice, beating Fukuoka Rizing 120-13 in their series opener Saturday, and then 98-95 on Sunday.  Osaka’s not in contention for the playoffs, but the Rizing, at 26-14, are potentials.

The Hamamatsu Higashimikawa Phoenix scored an easy win over Tokyo’s Cinq Reves, 88-73, Saturday, but found the tough capital city squad impossible to get past Sunday.  The Cinq Reves won in overtime, 96-92.  The Phoenix are now 24-16, while Tokyo is out of the running at 14-24.  The Saitama Broncos rolled past the Akita Northern Happinets 96-89 in their series opener, then did it again in a 99-98 squeaker Sunday to deny the 20-18 Happinets.  The Broncos, at 10-28, are not in the playoffs picture.

The Miyazaki Shining Suns found the Gunma Crane Thunders easy picking Saturday, winning 83-74.  That’s something important for the lowly Shining Suns, who did it again Sunday, 76-65, the first time all year the 7-33 Miyazaki squad put together two wins in a row.  They’ve the worst record in the BJL, although at 9-31, the expansion first year Crane Thunders aren’t much better.  The Sendai 89rs and Takamatsu Five Arrows split their series over the weekend.  Sendai’s improved to 15-23, while Takamatsu’s in the middle of the pack at 16-24.