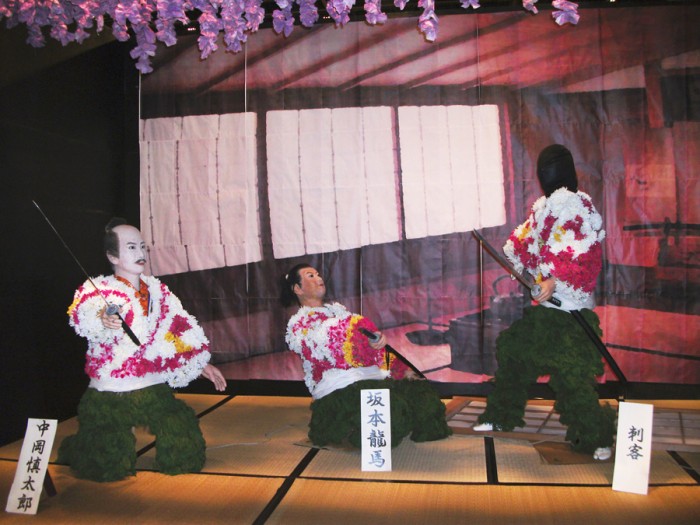 The Chrysanthemum Figure Exhibition at NeoPark in Nago depicts the over 800-year old tale of Taira samurai clan’s rise to power and subsequent demise.

The 26th Chrysanthemum Figure Exhibition, one of the island’s premier doll show exhibitions, is now in progress at NeoPark Okinawa in Nago City.

Although organizers say admission is free, an entrance fee of ¥730 for adults, ¥415 for junior and senior high school students, and ¥310 for those age 4 through elementary school age will be charged.  The exhibition is at the Nature Museum in NeoPark Okinawa, 4607-41 Nago.  The exhibition runs through March 31st.

This time, The Heike family’s prosperity and decline is directed with a chrysanthemum 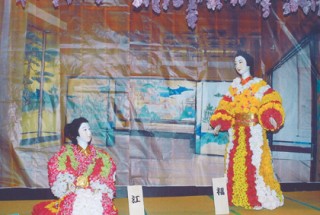 All human-size dolls in the exhibit are created using flowers.

Kiyomori Taira was born in 1118 and died March 20, 1181.  He was a military leader of the late Heian period of Japan, and established the first samurai-dominated administrative government in the history of Japan.

After the death of his father, Taira no Tadamori, in 1153, Kiyomori assumed control of the Taira clan and ambitiously entered the political realm in which he had previously only held a minor post. In 1156, he and Minamoto no Yoshitomo, head of the Minamoto clan, suppressed the Hōgen Rebellion. This established the Taira and Minamoto samurai clans as the top warrior clans in Kyoto. However, their new strength in effect caused the allies to become bitter rivals, which culminated three years later during the Heiji Rebellion in 1159. Kiyomori, emerging victorious with Yoshitomo and his two eldest sons killed, was now the head of the single most powerful warrior family/clan in Kyoto. However, his clan’s power and influence in the provinces at this time is a matter of debate. Kiyomori showed mercy and exiled a few of Yoshitomo’s sons, including Yoritomo, Noriyori, and Yoshitsune – a benevolence that would turn out to be the Taira clan’s downfall later on.

Due to his status as the head of the sole remaining courtier/warrior clan, Kiyomori was in a unique position to manipulate the court rivalry between the retired sovereign Go-Shirakawa and his son, Nijo tenno (tenno – sovereign). Via this manipulation, Kiyomori was able to climb the ranks of government, though the majority of his promotions as well as the success of his family in gaining ranks and titles at court was due to the patronage of the retired sovereign Go-Shirakawa. This culminated in 1167, when Kiyomori became the first courtier of a warrior family to be appointed Daijō Daijin, chief minister of the government, and the de facto administrator of the imperial government. As was the norm, he soon relinquished the position and leadership of the Taira clan, with the goal of maintaining the social and political prestige of having attained the highest office in the land, but being free of the attendant duties. This had been a common practice for many years in the highest levels of Japanese government and in doing so Kiyomori was asserting what he felt was his strong position in the Kyoto government. However, many of the courtiers from traditional (non-warrior noble families) were less than pleased with both Kiyomori’s attainment of the rank of Daijō-daijin and how he comported himself with regard to other high ranking courtiers.

In 1171, Kiyomori arranged a marriage between the Emperor Takakura and his daughter Taira no Tokuko. Their first son, Prince Tokihito was born in 1178. The next year, in 1179, Kiyomori staged a coup d’etat forcing the resignation of his rivals from all government posts and subsequently banishing them. He then filled the open government positions with his allies and relatives, and imprisoned the cloistered Emperor Go-Shirakawa. Finally, in 1180 Kiyomori forced the emperor Takakura to abdicate and give the throne Prince Tokihito who became Emperor Antoku.

With the exercise of Taira’s power and wealth and Kiyomori’s new monopoly on authority, many of his allies, most of the provincial samurai, and even members of his own clan turned against him. Prince Mochihito, brother of Emperor Takakura, called on Kiyomori’s old rivals of the Minamoto clan to rise against the Taira beginning the Genpei War in the middle of 1180. Kiyomori died early in the next year from sickness, leaving his son Munemori to preside over the downfall and destruction of the Taira at the hands of the Minamoto in 1185. Legend has it that at the time of his death, Kiyomori’s fever was so high that anyone who attempted to even get near him would be burned by the heat and his corpse had to be left to cool for several hours before it could be removed.