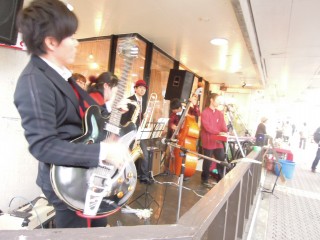 Saturday’s activities are under the St. Patrick’s Day banner, with a parade in honor of the national festival of Ireland.  This marks the seventh time the festival’s been held on Chuo Park Avenue.  The parade begins at 3 p.m., following ceremonies 15 minues earlier.

Okinawa City’s Gate 2 Street is the venue for MUSIX 2013, the Okinawa Asia International

There will be plenty of green on Park Avenue on Saturday as the St. Patrick’s Day is celebrated for the seventh time on the street.

Music Festival.  Gate 2 Street and Chuo Park Avenue will be transformed into pedestrian paradise both days.  The events both days span the noon ~ 8 p.m. time, with streets coming alive for the quarterly event.

More than 50 bands will be participating at eight locations on Chuo Park Avenue.