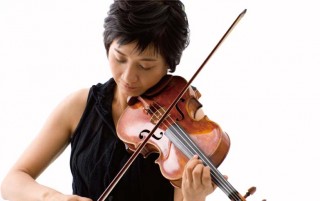 Itsuko Arakaki presents the first ever classical viola concert in Okinawa on Sunday.

One of Okinawa’s few viola players will be bringing her talents to the stage at Palette Kumoji Civic Theater Sunday, presenting the first-ever viola concert in Okinawa.

The theme’s purely classical for Itsuko Arakaki, sponsor of the concert.  She’s a professional working on Okinawa, having finished the Okinawa Prefectural University of Arts graduate school and the Osaka College of Music.  She’ll take the lead with string players who play an active part in prefecture music, and they’ll be playing the classical themes together.  Although all musical pieces are considered attractive, she says Bach’s music being performed last is perhaps most popular.

Arakaki will make Bach, along with five other classical composers, a special afternoon.  It becomes a performance carrying a cembalo this time, bringing out the first charm of viola, it’s tone.  Visitors can easily detect the variations between a violin, cello and viola.

Doors open at 1:30 p.m. for the 2 p.m. performance at the theater on the Palette Kumoji 9th floor.  Advance general admission tickets are ¥2,500 for adults and ¥1,500 for junior high school age students and younger.  At the door, tickets are ¥500 more.