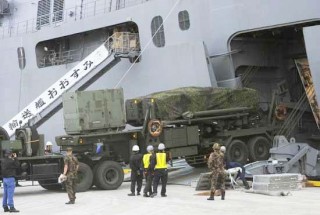 Japan’s Defense Ministry says the surface-to-air missiles are being permanently deployed in Okinawa Prefecture.  The move is designed to shield the country from missiles that could be fired by North Korea.

Vehicles carrying PAC-3 launch systems and other equipment were scheduled to arrive this afternoon, having left the Air Self-Defense Force’s Hamamatsu base in Shizuoka Prefecture, central Japan, shortly before 9 a.m. Tuesday. The PAC-3 equipment was sent to a Tokyo Bay terminal and mounted onto a ferry operated by a private company.

A total of four PAC-3 units are being permanently deployed at the ASDF’s Naha base and Chinen sub-base in Nanjo. The permanent deployment of PAC-3 missiles in Okinawa was previously scheduled to take place by the end of March 2015. The ministry moved up the schedule as North Korea looks ready to launch missiles, officials said. PAC-3 systems were temporarily sent to Okinawa when North Korea fired missiles last year.

In mainland Japan, the ministry has already deployed PAC-3 systems in central Tokyo and elsewhere. In Okinawa, the U.S. military has PAC-3 systems at Kadena Air Base.  In Japan’s missile defense system, the PAC-3 equipment is used to intercept missiles if Standard Missile-3 interceptors mounted on Aegis destroyers fail to destroy them in outer space.

Defense Minister Itsunori Onodera said Japan will keep its surveillance in preparation for a possible missile launch by North Korea.