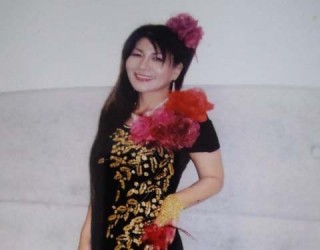 Singer Jun Gilmour is on stage at Tembus Hall on Sunday.

bringing a variety of music genres, including Okinawan folk, enka and western music.

Admission is ¥2,500 for the concert, which begins at 7 p.m.  Tenbus Hall in Makishi is located diagonally opposite Mitsukoshi Department Store on Kokusai Street.

Gilmore performs live at various places in Okinawa now. Although she began her career as a singer, she is using her dancing to charm audiences. She says she began singing to encourage and cheer up her sick son.

She often performs with her son, who studies dance. Her songs send peace message from Okinawa like “Bridge of Love, Circle of Earth” which is the subtitle of this event. In addition to her singing, the show includes a martial art performance of former karate champions.