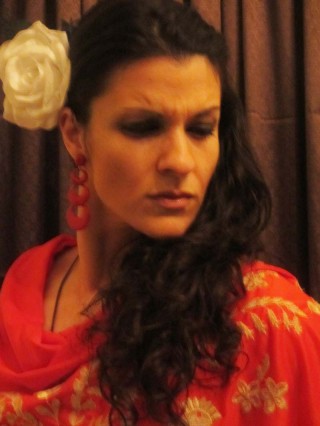 Maria Jose presents Spanish flamenco to Okinawa in all of its various forms at Ashibinaa Theater in Korinza Mall.

Maria Jose, a Spanish dancer living in Okinawa, is presenting the performance. She began ballet at the age of eight, and began flamenco & Spanish dance at the age of 11, in the Valencia district in Spain. She finished the study as a classic dancer by the Royal Academy of Dance of Spain in 2008, and acquired the qualification of the lecturer of flamenco through the Spanish dance society of Valencia in Spain.

She has also has experience teaching Spanish dance and classical ballet from 17 years of age. After “tablaos”, a theatrical performance in Spain, she has started flamenco, comedy Spanish show, and sevillanas at “Island Spain Village” in Japan for two years. She began to teach flamenco from June, last year in Okinawa, and has performed some flamenco shows in Nago.

The coming event on April 5th is held by Maria Jose and her Okinawan students. The event is about flamenco, but not just flamenco. Right now in Spain and all over the world, many flamenco dancers try to create new styles of flamenco by incorporating different rhythms and styles with traditional flamenco without losing the essence of it.

The history of flamenco in Spain is long, and there is not only the style using castanets but a more elegant and classical style. This kind of dance is performed in the Zarzuela, Spanish Opera, and has become very popular in Spain. It is used in the National Spanish Ballet. In Okinawa, this is the optimal event for experiencing the culture of flamenco.