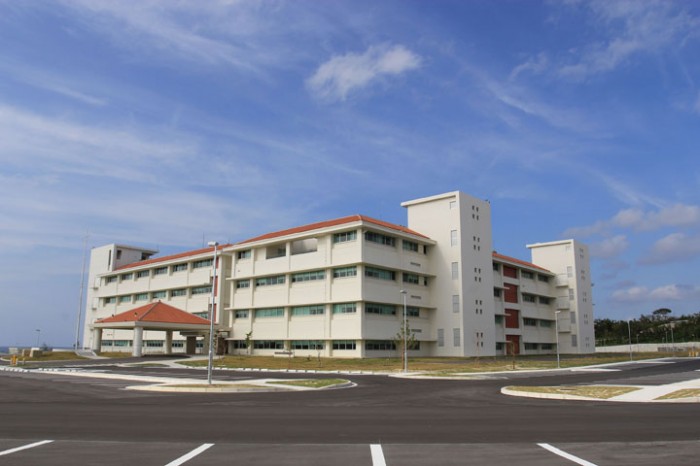 From tents to Quonset huts to a four-story concrete building to a new multi-million dollar U.S. Naval Hospital just opened on Camp Foster, military medicine has never been better for troops and families stationed on Okinawa and across the Pacific Region.

The new U.S. Naval Hospital Okinawa opened only weeks ago after more than a decade in planning and construction, replacing a 50-year-old hospital on Camp Lester.  The new hospital is 443,000 square feet, compared with 255,000 at Camp Lester, and has 86 beds, expandable to 129 when needed.  The Camp Foster facility is located on high ground outside the tsunami flood zone, and is built to withstand earthquakes.

Within the new hospital are private Labor, Delivery, Recovery and Post Partum rooms, each with its own shower/bath, and sleeping accommodations for an additional family members. It’s state of the art, with modern electrical and medical gas systems, as well as energy efficient technology and superior climate control.  Its four floors plus a basement provide for roomier patient care areas, wider hallways and doorways to focus on patient and staff safety.

For those using the new hospital, perhaps the best news is increased parking capacity to 1,300 vehicles.  Planning began well over a decade ago, with construction finally set into motion in 2009.  The U.S. Naval Hospital Okinawa serves 55,000 on Okinawa, but 188,000 including all other patients around the Western Pacific.  The hospital operates two dozen clinical services, as well as Emergency Medicine, laboratories and a pharmacy.  On any given day, the Naval Hospital admits 35 patients, has 1,100 clinical visits, and fills more than 1,000 prescriptions.  On average, 100 babies are born in the hospital each month.

As with everything else on Okinawa, change has been evolutionary.  The military populations changed, bases changed and were handed back to the Japanese, and more modern approaches to accomplishing the mission were instituted. 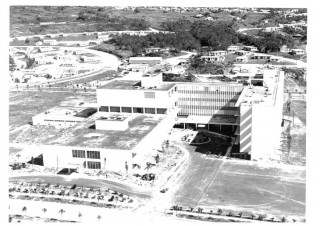 Hospital on Camp Kuwae, as it was known back then, shortly after opening in 1958. (Photo courtesy of U.S. Navy Hospital)

into a strip of Quonset huts. The huts were located in present day Ginowan City and known as Camp Mercy Hospital. The hospital actively supported world forces during the various conflicts and continued to sustain readiness for troops stationed on the island.

In 1954, construction began on the U.S. Army Hospital on Camp Kuwae. The hospital was commissioned in 1958 and it eventually expanded to a 700-bed facility to provide medical treatment for U.S. forces operating throughout the Pacific. Negotiations began in March of 1976 for the transfer of the hospital from the U.S. Army to the U.S. Navy and from October 1976 until its commissioning as the U.S. Naval Regional Medical Center on February 28, 1977, Army and Navy personnel jointly staffed the facility.

Today most Okinawan residents continue to refer to the base as “Camp Kuwae”, as was its name for almost thirty years. However, on January 28, 1982, with an official dedication taking place on June 8, 1982, the base was renamed Camp Lester in memory of Medal of Honor recipient Hospital Apprentice Fred Faulkner Lester.

On June 8, 1945, Lester, a Corpsman with 1st Battalion, 22nd Marines, 6th Marine Division, spotted a wounded Marine lying in an open field beyond the front lines. Disregarding his own safety, he crawled steadfast toward the injured Marine under a barrage of open fire, sustaining his own life-threatening injuries. While pulling his comrade to safety, Lester was struck by enemy fire a second time and realizing the mortality of his own wounds, he instructed two members of his squad in the proper medical treatment of the rescued Marine and two other injured Marines. He refused medical treatment for himself and soon succumbed to his wounds, gallantly giving his life to preserve the lives of others.

The U.S. Naval Hospital, Camp Lester, Okinawa, and now the new hospital on Camp Foster, is the largest overseas naval medical treatment facility and a referral center for the entire Western Pacific. It is jointly staffed by Navy, Army, Air Force and Marine Corps personnel. The hospital serves a beneficiary population of 55,000 active duty personnel, their family members, civilian employees, contract personnel, retirees, and also provides referral service for over 188,000 beneficiaries throughout the Western Pacific.

In the future, according to Japanese Ministry of Defense, the facility will be transferred to the U.S. formally by a decision by the Japanese Cabinet. The Japanese Government will then process an intergovernmental agreement to finalize the transfer, but there is still ahead a substantial relocating time from Camp Lester before the deal is finalized.

The northern part of Camp Lester has already been returned, and the rest of the base will be returned once the transfer of the hospital is complete.

Further, officials at the Ministry of Defense explain that “Even when the Navy Hospital is completely relocated, There are other facilities on Lester, such as residential areas, that need to be relocated before the land can be returned. Because a relocating plan for the residential areas has not been arranged yet, the exact timetable for returning all of Camp Lester is still unknown.”

The Navy Hospital on Camp Lester consists of a total of 13 buildings including medical care and lodging facilities, and a blood center, a total of 56,000 square meters.