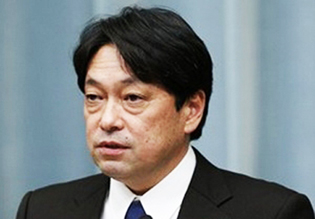 landed in Okinawa Prefecture on Saturday.

Residents made sure Japan’s defense chief knew how they felt about a Japan-U.S. agreement announced the previous day on the return of land now used by six U.S. military facilities to the south of Kadena Air Base in Okinawa Prefecture. They said the agreement does not specify any time frame for the return of the land and appears intended to keep the U.S. Marine Corps Air Station Futenma within the prefecture.

“Listen to the voice of the Okinawan people,” the protesters shouted ahead of Onodera’s meeting with Okinawa Governor Hirokazu Nakaima in Naha. The 120 protesters included Diet members, citizens and prefectural assembly members angry and frustrated over the lack of progress in removing U.S. military bases from the prefecture.

The demonstrators called for the unconditional return of land used by the Futenma air station and argued against the planned relocation of the base to the Henoko area of Nago, also in Okinawa. Under the latest Japan-U.S. plan, the Futenma land would be returned to Japan in “fiscal 2022 or later” as long as certain conditions were met. “Okinawa will never accept any plan that is forced upon it by the central government,” said a 65-year-old man who took part in the demonstration. “Relocating bases to somewhere else in Okinawa will only divide the prefecture.”

In his meeting with Onodera, Nakaima pointed to the vague timeline included in the plan, referring to the phrase “or later” that was included after targeted dates. “The only way we read that plan is that no one knows when the land will be returned,” the governor said.

After the meeting, Nakaima told reporters that the plan would leave Futenma in its present location in the densely populated area of Ginowan until at least fiscal 2022. He says “Nine to 10 years is just too long to have it in one place.”  During the meeting, Onodera emphasized that the plan had a timeline of returning the land used by the six military bases between fiscal 2013 and 2028.

Onodera explained that “Prime Minister Shinzo Abe strongly called for a specific schedule for the return of the land in order to promote effective usage of the land.”

The defense chief also pointed to the fact that unexpected developments could delay the relocation of various facilities. The governor appeared unconvinced.

“The history of the return of land used by U.S. military bases has been one of not returning it according to plan. I ask that you make every effort to realize this plan,” Nakaima said.

The vague wording “or later” in the agreement raised criticism across the prefecture.

“The phrase was likely included because the central government was not confident about meeting the deadlines,” said Susumu Inamine, the mayor of Nago where Henoko is located.

The latest plan upset even local politicians of the ruling Liberal Democratic Party.

Masatoshi Onaga, a prefectural assembly member who serves as chairman of the LDP prefectural chapter, and other high-ranking officials met with Chief Cabinet Secretary Yoshihide Suga on April 3.

They told Suga that only the inclusion of a “surprise” in the plan would change local public opposition regarding the Futenma relocation to Henoko.

However, Suga only said that Japanese officials were involved in difficult negotiations with the United States.

After the agreement was announced, Onaga said: “It does not contain anything that will lead the Okinawa people to say ‘the central government did a good job in negotiating with the United States.’ There will be no effect on public opinion in Okinawa opposed to the move to Henoko.”

Residents in the areas where some of the U.S. military facilities are located also expressed disappointment.

Saneaki Aniya, 73, had his farmland expropriated for use by the Futenma base. According to the plan, his land will be returned by fiscal 2022 or later.

“I have almost no idea when that will be,” Aniya said.

Although the land had been in his family for generations, Aniya has not set foot on it since 1958, when a fence was constructed around the base.

“The land may not be returned while I am still alive,” he said. “It might have already been returned if they had sought to relocate the base outside of Okinawa or Japan from the very beginning.”

The Japan-U.S. plan calls for returning the land after various buildings and facilities have been relocated to other locations.

Residents living in candidate sites to receive those facilities are already raising their voices against any move.

A warehouse in the Makiminato Service Area is scheduled to be moved to the Kadena ammunition depot area.

Ryoson Kuba, 76, makes fertilizer for his vegetables on land fenced off with barbed wire. Although the land is part of a U.S. military facility, local residents have been allowed to use it under an informal agreement.

“This is originally our land that the U.S. military took from us,” Kuba said. “What is the central government saying now? If it tells us to leave, I want to tell government officials to return the situation here to the state it was before the start of World War II.”