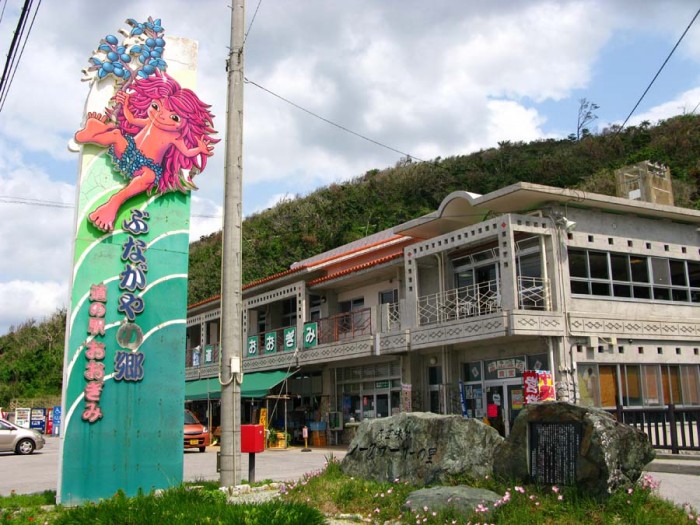 Michi-no Eki Ogimi has a farmers’ market on the first floor, and restaurant Beatuful View on the second floor offering a nice view over the ocean for its customers.

Japan Update’s on an island-wide tour of roadside rest areas, and our fifth feature is Michi-no Eki Ogimi.

The Michi-no Eki is 2½ hours drive north from Naha on Highway 58. Ogimi village, where the Michi-no Eki located, is in Yambaru, as the north regions of Okinawa are called, and is a small village with a population of 3,400. Ogimi has scenic mountains, deep forest, rich nature and original Okinawan landscape such as old folk houses with red tiles. 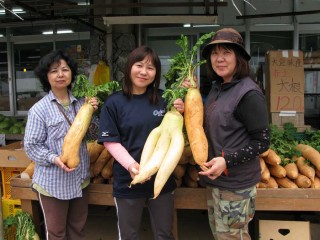 From the left, Yoshiko Taira, a janitor at the Michi-no Eki Ogimi,Toyoko Yamashiro and Etsuko Azuma, staff at the farm stand show off local daikon radishes. 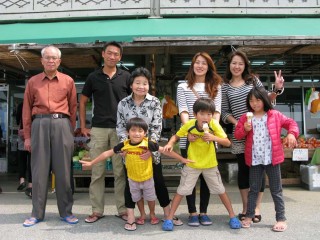 A group of visitors from Naha and Saitama stopped by for a lunch.

Moreover, Ogimi is also noted for the longevity of its people, thus their traditional and healthy diet with natural bounty has been getting wide attention. Ogimi has several sightseeing spots for nature-based experiences including Nana Taki, a waterfall, Shioyafuji, a mountain, and Shioya bay that has a beautiful contrast between hills and the sea.

The birth of Michi-no Eki Ogimi was 1999, and it has been administered as a rest spot for visitors coming to Yambaru. Currently, there are a farm stand and two different restaurants that link to Ogimi’s local products. The landmark to find the road station is a big Bunagaya sign. Bunagaya is a kind of spirit that loves peace and nature living in Okinawa since very early times. Ogimi has chosen the spirit for the village character, so the Bunagaya signs can be seen all over the village.

The farm stand specialty is Shiqwasa and items made from the fruit. Visitors from outside of the region come to the Michi-no Eki in order to buy Shiqwasa for the good reason that Ogimi is the largest producer of the fruit in Japan. “Red soil Japanese radishes are on the shelves until the middle of May, and Americans who live in Chatan visited us to get the radish today,” say Toyoko Yamashiro and Etsuko Azuma, staff of the farm stand. The vegetable grows in the red soil of Ogimi and is juicy and sweet. Cut and dried radish is equally popular as souvenirs here.

Two restaurants adjoin the produce stand, Furusato Shokudo and Beautiful View, and they attract plenty of visitors, too. At Furusato Shokudo, Okinawan cuisine made by Okinawan mothers is served. Its dishes use vegetables and seafood harvested in Ogimi village as ingredients. Especially popular are Umibudou rice bowl from Shioya bay, Tofu Chanpuru and Miso soup combination meal. Shiqwasa ice cream is also popular, and an English speaking staff back from Canada will help to choose your dishes. 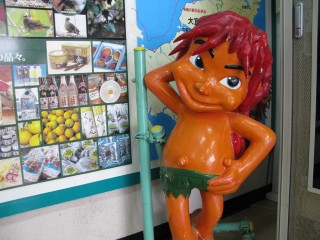 Restaurant Beautiful View on the second floor serves Japanese Soba. The noodle is different from Okinawan style, as Okinawa Soba is made from flour, but Japanese noodles are produced from buckwheat. Though the plants cannot thrive during winter in mainland Japan, it is possible to grow them in Okinawa’s mild climate. Japanese Soba is mixed buckwheat and wheat, but 100% buckwheat noodles gathered from Ogimi village can be enjoyed in the restaurant. It’s location is good, with a beautiful view spreading out through its big windows.

“We visited here to refresh and have a lunch. The attraction of the Michi-no Eki is the dishes made of ingredients from Ogimi village, they tasted so good, and we enjoyed looking at the farm products, too.” said a visiting group from Naha and Saitama Prefecture. They also said they were going to find Okinawa rails in the area.

“Ogimi village has no urban atmosphere; however there is a vast nature instead. Please experience the nature here,” says Yoshiko Taira, a janitor at Michi-no Eki Ogimi. As you travel farther north, the number of convenience stores decrease, so this facility comes easily in mind. Opening hour of the farm stand are 8:30 a.m. to 5:30 p.m., Furusato Shokudo is open11:30 a.m. to 5:00 p.m. and Beautiful View restaurant 11:00 a.m. to 5:00 p.m.