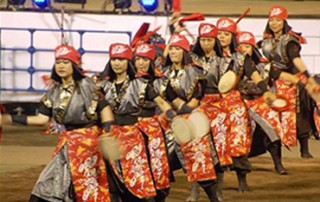 Okinawa, once called the “emigration prefecture” for its wide ranging movement of its citizens, is now having its World Youth Uchinanchu Association team with the Naha Commercial Center Association to showcase that travel, and bring some music to the stage at the same time.

The first of the two-part event is now in progress through Saturday on Heiwa Street Miscellaneous Goods Department, noon ~ 6 p.m.  This is a free exhibition on Heiwa, one of the most crowded streets in all of Okinawa, across Kokusai Street from Okinawa Mitsukoshi Department Store.  It is a shopping arcade, with this exhibition presenting data on the Okinawa emigration, which spread to Hawaii and South America. Photographs of emigrating Okinawans are on display. 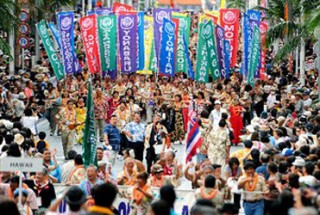 Saturday also brings the Okinawa Folk Music Festival to the Nigiwai Space, next to the former 2nd Makishi Public Market, in Matsuo, Naha City.  The free event runs 11 a.m. ~ 8 p.m., with not only the music of Okinawa, but the music of various genres being performed.  In addition to performances by college student groups in Okinawa Prefecture, many local artists will also participate.  There will also be a panel discussion on music, and food and beverage stalls in operation.

Okinawa ‘Uchinanchu’ emigrated to Hawaii, Central and South America, as well as the U.S.  There are many ‘Uchinanchu’ who work or study abroad today, and the WYUA introduces their various activities.