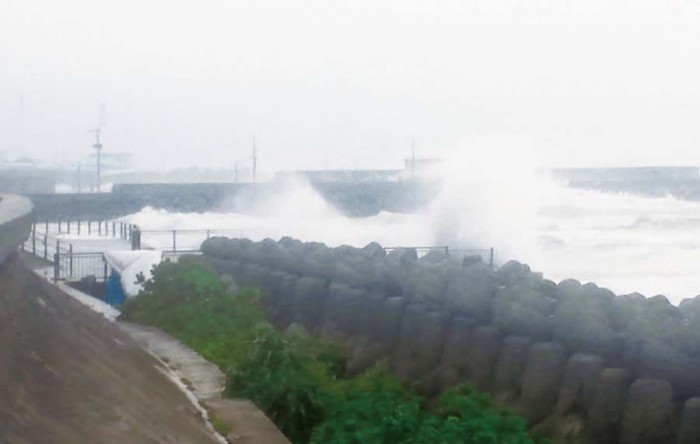 Typhoon Samba in September last year brought sustained winds of 194 kph and gusting up to 241 kph, but caused very little actual damage, although the storm’s ferocity was impressive.

The 2013 typhoon season officially kicks off two weeks from now, onJune 1st, and thus far there’s nothing on the ocean horizons to suggest any storms before then.

Prognosticators are mixed on how powerful this year’s storms could be, noting last year was average but active, generating the most storm energy since 2004.  In the early months, typhoons named Vincente, Haikai and Tenbui raced across the north Pacific, just teasing Okinawa to get things warmed up for late summer.  Between mid-July and mid-August, there were nine storms touching Okinawa. 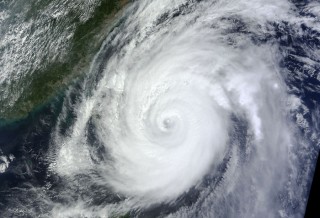 This is typhoon Jelawat that hit Okinawa late September 2012 as seen in this satellite photo.

They were nothing, though, compared to the August ~ September storm excitement.  First came Super Typhoon Bolaven with 116mph/186kph winds that built to a peak on August 19th and then maintained power to hammer Okinawa the 26th.  Okinawa actually got off easy, with 55mm/21.71” of rain and only one death.  Mainland Japan suffered two dead as the storm moved north, and South Korea suffered 59 fatalities and the death toll in North Korea is believed to have been at least 59.  More than 2.1 million homes were damaged or destroyed by the storm, said to be the most powerful in a decade to hit South Korea.

September brought Samba, and she certainly wasn’t interested in dancing.  With an eye sprawling half the size of Okinawa, she hit at 6:30 a.m. on the 26th with 120mph/194kph winds gusting to 148mph/241kph.  Again, good fortune for Okinawa as damage was minimal, although the visual effects were spectacular.

Not to be outdone, Typhoon Jelawat capped September’s typhoons on the 29th.  Plenty of rain and wind, but little in the way of damage.  By October, Severe Tropical Storm Gembi was more than some wimpering and giving folks one last opportunity to put away the lawn furniture and kids stuff. 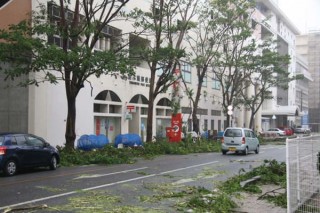 The biggest headache for property owners on Okinawa is clearing the debris after each storm.

The 2013 typhoon season isn’t forecast to be particularly heavy, but forecasters say there’s always that chance Mother Nature could pull some surprises.  The names to watch—this year’s first storm name is Sonamu, chosen by North Korea, and then Shanshan, a girl’s name in Hong Kong, Yagi, meaning goat, by Japan—run from Leepi selected by Paos, Bebinca by Macao, Rumbia by Malaysia, Srulik, a Micronesian name, Cimaron by the Philippines, Jebi chosen by South Korea, and Mangkhut by Thailand.  Everyone hopes we’ll not need more names than that this year.

Two strong super typhoons found Okinawa in 2011, part of ten typhoons on that year, seven of them intense.  Overall, there were 21 named storms in 2011.

In Arabic, typhoon means deluge.  In Greek it’s a whirlwind, while Mandarin Chinese explains it as a great wind. The name typhoon evolved from southern Europe, across Arabia to India, where it was first cast into English in 1588.  It was spawned from a severe storm that ripped India, leading officials to combine the Greek and Chinese concepts into the word that today frequently means death and severe destruction in Asia.

Each of the four TCCOR categories and sub-categories has specific requirements and restrictions on service members and the military bases.

TCCOR 4:  Okinawa remains in this state throughout the season.  Destructive winds of 58 mph or greater are possible within 72 hours.  Personal items kept outdoors, such as barbeque grills and children’s toys, should be brought inside.

TCCOR 3:  Destructive winds of 58 mph or greater are possible in the area within 48 hours.  People should make sure they have adequate stocks of food and water, as well as other emergency supplies.  Secure all doors and windows.

TCCOR 2:  Destructive winds of 58 mph or greater are anticipated within 24 hours.  Store critical documents, cash and credit cards in waterproof container.  Be prepared for evacuation measures.

TCCOR 1:  Destructive winds of 58 mph or greater are anticipated within 12 hours.  Stay indoors, or be prepared to follow directions to indoor locations.

Shortly before a typhoon strikes Okinawa, the military will declare TCCOR 1-E (Emergency), meaning that all nonessential personnel go indoors and remain until the storm has passed and the all-clear is issued.  Once that happens, the military puts the island in TCCOR 1-R (Recovery), which allows some restricted personnel movement.

Preparations for typhoons are being encouraged now, including cleanups around residences and dormitories, and gathering stocks of emergency supplies.  The Defense Commissary Agency is encouraging customers to “load up their pantries” as part of an awareness campaign encouraging families to keep nonperishable foods, water and other necessities on hand for emergencies.  DeCA is teamed with the American Red Cross’ Armed Forces Emergency Services Branch in the “What’s In Your Closet” campaign.

Commissary store directors on Okinawa are taking extra measures to be sure their patrons are prepared for the upcoming season, and Defense Commissary Agency says “we want to raise awareness of the need to keep emergency supplies on hand, and that shoppers can save 30% or more by using their commissary benefit.”

The American Red Cross has representatives at commissaries across the island to provide information and answer questions about disaster preparedness.   The Department of Homeland Security and the Federal Emergency Management Agency are both working closely with local communities and relief organizations to remind residents to make emergency preparations.

A seven-day emergency supplies closet is recommended by officials.  Stocking these items will protect families during a typhoon, when power is frequently off and water supplies contaminated:

• High-energy foods such as nuts, raisins and granola

• Water (at least one gallon per person daily)

Typhoons and severe storm information will be disseminated on American Forces Radio and Television, and posted on Kadena’s weather website.