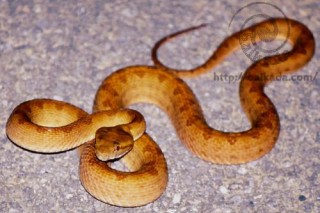 A Sakishima habu snake has been captured on Miyako Island by a resident, sending officials worrying about how it got to the southern Okinawa island.

This is the first time a Sakishima habu has been captured on Miyako.  The breed has never been seen before on the island, leading Okinawa Prefecture officials to speculate that someone hand carried it to Miyako, or if it slipped into a cargo being transported to the island.

The Sakishima habu captured is a male, 44 centimeters long and weighing 16 grams.  Officials described it as a baby habu, perhaps six months to one year old.  It was found at a bench in Hirarin Park near Hirara Port.  A man having his lunch at the park spotted the snake, captured it by hand, and put it into a bottle.  He and a friend took it to Miyako Health Care Center.  The snake has been frozen and sent to the Okinawa Prefecture Health and Environmental Health Sciences Institute in Nanjo City, where it was confirmed as a Sakishima habu.

Following the confirmation, Miyako Health Care Center officials ordered an antivenin for habu from mainland Okinawa, and has alerted Miyako Hospital as a safety precaution.  It also advised Miyako Police to prepare capture equipment for habu snakes.  A lab worker at the Okinawa Prefecture Health and Environmental Health Sciences Institute, Kouki Terada, says they often receive requests for assessments on whether a snake is a habu or not, “but I recognized easily what it was in this case.  It’s kind of a surprise for us, too.”