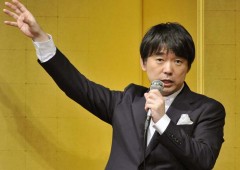 Toru Hashimoto, Osaka Mayor and co-leader of Nippon Ishin-no Kai has gotten himself in a jam with his recent comments on the “Comfort Women”, which he made during and after his recent Okinawa visit.

Osaka Mayor Toru Hashimoto has made comments throwing support behind the “comfort women” prostitution system created for Japanese soldiers during the wartime.

“Anybody can tell that the comfort women system was necessary to give a rest to fighting soldiers who risked their lives,” Hashimoto, a co-leader of Nippon Ishin No Kai (Japan Restoration Party), told reporters at a morning news conference. Hashimoto made a similar remark in the afternoon, saying that the system “was necessary at the time to keep the military disciplined.” Comfort women, believed to have included many Koreans, were forced to provide sex to soldiers of the now-defunct Imperial Japanese Army during the wartime.

Hashimoto also said he has told a U.S. military official in Okinawa Prefecture that he wants U.S. servicemen in Japan to actively use the sex industry, noting that there are places in Japan that allow people to release their sexual energy in a legal way. He made the proposal while visiting Okinawa to inspect the U.S. Marine Corps’ Futenma Marine Corps Air Station during the Golden Week holiday period.

Hashimoto’s remarks about comfort women came at a time when China and South Korea have expressed anger at Japanese Prime Minister Shinzo Abe’s comments about history issues. Defending Hashimoto, Nippon Ishin’s Diet affairs head, Sakihito Ozawa, said the leader had also stressed the importance of facing up to the fact that Japan had invaded other Asian countries.  A Nippon Ishin executive, however, says Hashimoto’s comments were problematic because they dealt with a taboo. Another party member said his remarks do not represent the view of the party.

An executive of the ruling Liberal Democratic Party said that the comments are likely to prove “fatal” to Hashimoto.  Banri Kaieda, president of the major opposition Democratic Party of Japan, stressed that “the comfort women system was unnecessary,” while Tadayoshi Ichida, head of the secretariat of the Japanese Communist Party, said: “I shuddered. Hashimoto is lacking in qualifications as a mayor and party leader.”

“I can just say we have laws that are against that (the use of prostitution)” in the department, he told reporters. “Thanks you for suggesting, but we’re just going to follow the laws and policy” of the department and the U.S. government, Little added.