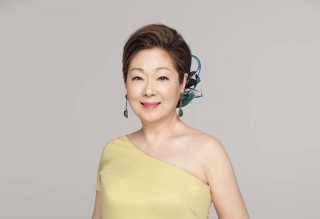 One of Japan’s most versatile singers and actresses has put Okinawa on her touring schedule, and will perform at the Okinawa Convention Center on June 2nd.

Singer Saori Yuki has been on the world stage for decades, working as a voice of NHK, a voice actor in Japanese anime, performing songs for commercial films, and performing Jazz and pop music.  She found her love for music as an elementary school student, and nurtured her desires through school, learning not only the music of Japan, but that of other countries.

At her Okinawa concert, she’ll be performing a diverse range of music, which she says is good for foreigners who don’t understand Japanese, since they’ll be able to much better appreciate her music.  She’s performed internationally, including in New York City.

Born Akiko Yasuda in Kiryu, Gunma, mainland Japan, she was raised in Yokohama  She began her singing career alongside her sister Sachiko, and in 1965 debuted with her first single “Hitchhike Musume (Hitchhiking girl)” from King Records Japan as Akiko Yasuda. The result was not successful, and she struggled until she made a national smash hit with “Yoake no Scat (Scat at dawn)” in 1969, with 1.5 million sales, which led her to sing at the NHK’s Kohaku Uta Gassen, the annual year-end music show.

Since then she had continued her appearance until 1978, and she received the Best Vocalist Award at the 15th Japan Record Awards with her hit “Koibumi (Love Letter)”.  She had quickly become a popular TV personality on numbers of variety shows and other programs, as well as actress in several movies. She received the Award of Outstanding Performance by an Actress in a Supporting Role in Japan Academy Prize in 1983 with her role of Chikako Numata, a mother of two difficult sons in The Family Game.

She started to refocus on her career as a vocalist with her sister Sachiko in 1985. They toured around the country with their specialty of Japanese Children’s songs, and received the Best Planning Award in 28th Japan Record Awards with their hit album Ano-toki, Kono-uta (those times, these songs). Their repertoire has not been limited to children’s songs but includes original songs, pops, classic, and anime songs.

In 2009 she released her first original album since 1984, commemorating the 40th anniversary of her singing career as Saori Yuki. A collaboration album with Pink Martini titled 1969 was released in November 201 in more than 20 countries, and quickly gained popularity in various places including the United States, Canada, Singapore and Greece.