Ishigaki produced alcohol and handicrafts are on sale thoughout the exhibition.

Southern Okinawa’s Ishigaki Island, a part of the Yaeyama islands chain, is being showcased with a three-day fair opening tomorrow at the Okinawa Times Building in Naha City. 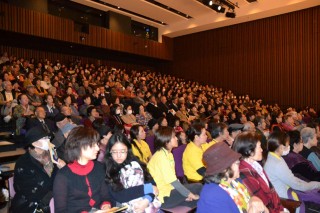 Ishigaki entertainment is on tap on Saturday’s two shows.

Visitors can taste gourmet foods of Ishigaki Island such as Yaeyama noodles. There will also be exhibition sale 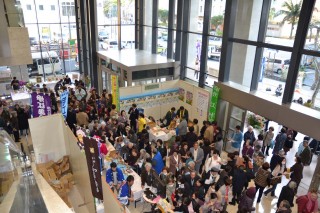 The exhibition venue is the new Okinawa Times Building in Kumoji.

of alcohol, and handicrafts such as Okinawan Kariyushi shirts, which are produced on Ishigaki. In addition, there will be performances of songs and dance of the Yaeyama islands on May 25th. The first performance is at 2 p.m. and a second at 6 p.m.  Tickets for the performances are ¥3,000 each, and can be obtained by calling (098) 860-3588.

Ishigaki is located southwest of Okinawa’s main island and is the second-largest island in the Yaeyama Island group. The city functions as the business and transport center of the archipelago. The island is served by New Ishigaki Airport that was inaugurated just a couple of months ago after nearly 40 years in the making.

Much of the island and surrounding waters, including Mount Omoto and Kabira Bay, are protected as part of Iriomote-Ishigaki National Park. Ishigaki Island, like the rest of Okinawa, is culturally influenced by both Japan and Taiwan, as well as China, due to its location off the north eastern coast of Taiwan. A tsunami of record height hit Ishigaki Island in 1771.

The island provided the scene for the arrest of one of the perpetrators of Aum Shinrikyo’s sarin gas attack, Yasuo Hayashi, 21 months after and 1,000 miles away from where the crime took place. Ishigaki Port is scheduled to be expanded so that five large Japanese coast guard patrol boats can be stationed there, as the disputed Senkaku Islands are administratively a part of Ishigaki City.