A scene of the camp and its background is made of pieces of cloth.

It’s called the Art of Gaman, or for many of us, the Art of Patience, and it’s the theme of an exhibition running through the end of this month at the Urasoe Art Museum.

The Art of Gaman exhibition was originally held in the Smithsonian American Art Museum Renwick Gallery of National Museum of American Art in 2010. It made its way to the Orient and was introduced in the program “close-up Gendai, or present age” of th Japanese national TV NHK, and called “the Big Echo.” Many voices, who wanted the exhibition in Japan, were also expressed in it. 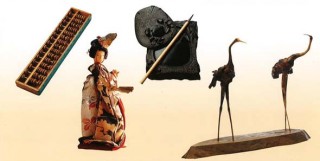 Almost all pieces are made by using available materials of every imaginable kind.

Compulsory internment of everyone of Japanese descent living in the U.S. was carried out in the western United States after the outbreak of World War II.  One of the major reasons for the action by the American government was the thought that Japanese Americans might be a target of persecution by other Americans. Another, of course, was the suspicion that the loyalty of those American citizens might lie on the wrong side.

However, even after being put in the accommodating facilities, those of Japanese descent did not lose man’s dignity. In order to overcome anxiety and suffering, connecting hope to the future, they used materials such as daily necessaries, small trees, etc. to make artistic handicraft articles.

With time to spare and skills and passion for handicrafts, Japanese Americans in the WWII era internment camps created a vast array of high-quality artifacts.