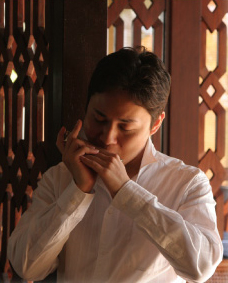 Sachito Higa from Urasoe is regarded as one of the best harmonica players in Japan.

The latest in a series of concert promotions by Garamand Hall in Ginoza Village Culture Center is coming up next Saturday, June 15th, featuring a chromatic harmonica player who has won numerous prizes in contests both in Japan and around the world.

The Chromatic Harmonica Concert featuring Sachito Higa of Urasoe City sees doors at the Center opening at 7 p.m. for an 8 p.m. concert.  Advance tickets are ¥1,000, while at the door they’re ¥1,300.  Reservations can be made with the Garamand Hall, Ginoza Culture Center, (098) 983-2613.

The Garamand Hall periodic concerts are designed to promote the local area by selecting musicians of various genre to perform.  Ginoza Culture Center also picks themes for the concerts. This time, it is Sachito Higa, who began playing a harmonica by himself at the age of 6. In 2000 and afterwards, he studied under a Japanese teacher who is a globally renowned harmonica player. Higa is now considered one of the best harmonica players in Japan.

In 2005, Higa was ranked 2nd in the World Harmonica Festiva. Incidentally, the score at that time had him a slim margin of 0.2 points behind the winner. Later, he was awarded 2nd place in the Asia-Pacific Harmonica Convention in 2006. His melancholic music is world class, although he clings to his local roots as he entertains audiences .

The chromatic harmonica is a type of harmonica that uses a button-activated sliding bar to redirect air from the hole in the mouthpiece to the selected reed-plate. When the button is not pressed, an altered diatonic major scale of the key of the harmonica is available, while depressing the button accesses the same scale a semi-tone higher in each hole. Thus, the instrument is capable of playing the 12 notes of the Western chromatic scale. In contrast, a standard harmonica can play only the notes in a given musical key.

Chromatic harmonicas are usually 12, 14 or 16 holes long. The 12-hole chromatic is available in 12 keys, but because the entire chromatic scale is available by definition, most professionals stick with the key of C, which is perhaps easier to remember, since slide in will automatically be the sharps of the associated note.