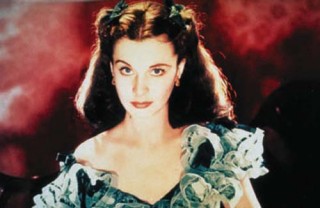 Classical movies from the ‘Golden Era” of the cinema are shown at 10 a.m. daily at Cinema Palette in Naha in a series that continues through Mar. 21, 2014.

Some of the world’s most successful motion pictures are showing on the Okinawa big screen, or will be doing so over the coming weeks as part of the long-term 10 a.m. film festival.

The festival, which launched in early April with the idea of running a classic motion picture for a two-week period, beginning with a 10 a.m. showing, and then repeating the show at least one more time each day, is featuring Gone With the Wind from Saturday through June 28th.  June 29th through July 12, Chariots of Fire will show, followed by Psycho July 13th through 26th, Les Aventuriers July 27th through August 9th, and Roman Holiday starting August 10th and running through the 23rd.

The first daily showing each day at the Cinema Palette on the 9th floor of Palette Kumoji building in Naha, is at 10 a.m.  General Admission is ¥1,000, and student admission is ¥500.  The entire year’s movie schedule, which runs through Mar. 21, 2014, can be found on the festival’s official website at http://asa10.eiga.com/2013, only in Japanese.

The festival has chosen only wonderful masterpieces, which were produced in the golden age of movies, and they’re being carried out over a one-year time. All works are shown by quality digital systems. In addition to the masterpiece selected for each time period, the lineup of works, which were very popular at the past three film festivals are being repeated. This year, a total of 25 movies are being presented at 42 theaters across Japan.

In Okinawa, the series is shown in “Cinema Palette” on the 9th floor of Palette Kumoji Building, also known for housing the Ryubo Department Store.