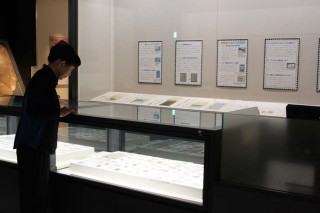 The original Ryukyu stamps are on exhibit at the Okinawa Prefectural Museum’s first floor Historical Exhibition Room through July 15.

Nearly 150 different postage stamps depicting the Ryukyu Islands are on exhibit at the Okinawa Prefectural Museum’s Historical Exhibition Room on the first floor.

The Ryukyu stamps, featuring globally popular and beautiful patterns, include five original pictures from which the stamps were created.  They’re all part of this historical collection of Ryukyu stamps issued in Okinawa during the post-World War II control of the islands by the U.S. Military Administration.  All together, 257 different Ryukyu stamps were issued between 1945 and 1972. 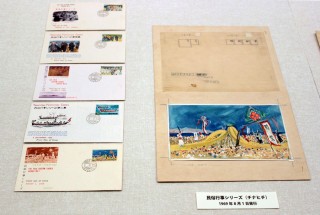 257 different postal stamps were issued in Okinawa during the American occupation between 1945 and 1972.

The first seven Ryukyu stamps were issued on July 1, 1948.  The stamps run the gamut of topics, including traditional performing arts, animals, plants, handicrafts, the subtropical zone, history and culture.  Each was designed into a special Ryukyu stamp.

Stamp collecting is a worldwide activity for millions of enthusiasts.  Since the Ryukyu stamps were very popular among collectors, they were used to promote and introduce Okinawa to an overseas population.  The secondary role of the Ryukyu stamps was to provide for additional foreign currency.