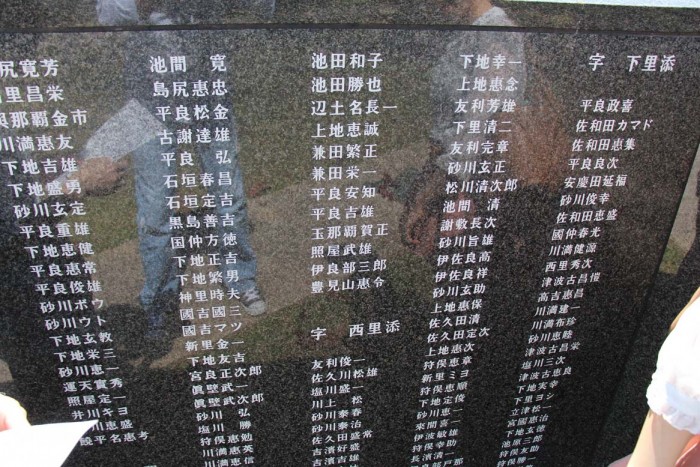 The Peace Memorial Wall in the Peace Memorial Park in Mabuni lists the names of all the people, Japanese and foreign alike, who perished during the Battle of Okinawa, with new names added annually as they become known. (Photo Tim Chambers)

The Battle of Okinawa ended 68 years ago this month, and the American Chamber of Commerce in Okinawa, United Services Organization, United Seamen’s Service and veteran’s organizations are teaming with Okinawa Prefecture to commemorate the event at Peace Prayer Park in Itoman.

The annual event Sunday morning begins with an Americans-led ceremony at the wall where the names of those killed during the three-month battle are inscribed.  This year’s guest speaker will be American Consul General Alfred Magleby.  ACCO President Walt Christiansen will emcee the ceremonies, while Robin Miller of the USO offers tributes and a military chaplain conducts the invocation and benediction.  The half-hour ceremony  memorializing U.S. service members who lost their lives during the battle  begins in late morning.

The Okinawa Prefecture ceremonies take place an hour later at another location at Peace Prayer Park.  The ACCO and USO will lay wreaths at the memorial site, and guests are invited to place American flags at the wall.  The VFW will also lay a wreath at the ceremony site.

Japan’s Prime Minister, Shinzo Abe, and Okinawa Governor Hirokazu Nakaima will lead the 90-minute national commemoration at Peace Prayer Park.  Last year, more than 5,000 attendees prayed for the more than 200,000 people killed in the battle, and issued a call for world peace. Other Commemorative ceremonies were held at war memorials at various locations throughout Okinawa, as people prayed for victims’ souls.

Fumio Kishida, the Minister of Foreign Affairs of Japan, and Defense Minister Itsunori Onodera are also attending the ceremony, as are Minister for Okinawa and Northern Territories Affairs Ichita Yamamoto, Minister of Health, Labor and Welfare Norihisa Tamura, Bunmei Ibuki, the President of the House of Representatives, and the president of House of Councilors, Kenji Hirata.

John V. Roos, the United States Ambassador to Japan is also attending. This is the first time in 18 years that the U.S. Ambassador will attend the ceremony.

Grieving family members visited Mabuni throughout the day last June 23rd, many running their fingers over the names of war dead inscribed in the Cornerstone of Peace as they prayed. About 5,500 people participated in the ceremony. Governor Nakaima praised the progress Okinawa has made, recalling the 40th anniversary of its reversion to Japanese sovereignty, saying, “Okinawa has developed impressively.” Nakaima referred to the excessive burden placed on Okinawa by hosting the U.S. military bases, saying, “I demand that the Japanese and U.S. governments relocate Futenma Air Station outside of the prefecture, and carry out fundamental revisions to the Japan-U.S. Status-of-Forces Agreement.”

Then Prime Minister Yoshihiko Noda said, “I am overwhelmed with shame regarding the fact that we have imposed a massive burden on Okinawan people in hosting the U.S. military bases for such a long time. I promise to do my utmost to ease the burden with tangible progress.” Takahiro Yokomichi, speaker of the Japanese House of Representatives, said he understood the remarks made by Governor Nakaima, saying, “We should not ignore the Okinawan people’s significant concerns about the Henoko relocation plan and the deployment of the Osprey to Futenma Air Station. There also needs to be a fundamental revision of the Japan-U.S. Status-of-Forces Agreement.”

Okinawa marked last year’s 67th anniversary of the end of the Battle of Okinawa at a time when protests were mounting over plans for constructing an alternative air base to replace the Futenma Marine Corps Air Station located in Ginowan City.  The proposed site, in Henoko district of Nago City, would be the new home to the MV-22 Osprey tilt-rotor aircraft assigned here in 2012.

All ACCO members are encouraged to attend and show respect as Okinawa honors those who gave their lives during the Battle of Okinawa.  Military personnel and service veterans will also be participating.  The USO and ACCO are running busses from the Legion Gate at Camp Foster to Gate 3 at Camp Kinser and to the Seamen’s Club Naha, prior to going to Peace Prayer Park.  The buses will depart the Seamen’s Club Naha to the American ceremonies, and will return to the Seamen’s Club immediately after the U.S.-led ceremonies.  VFW Post 11435 is among the veteran organizations participating.

Those wanting to participate in both the U.S. and Okinawan ceremonies should be prepared to drive from Naha to the ceremonies sites at Peace Prayer Park.  Dress for the event should be black or dark colors, including Kariyushi wear.  No military uniforms are to be worn.  Veterans and retired organizational headgear may be worn at the American ceremony, but the Prefecture has asked that they not be worn at the Okinawan ceremony.