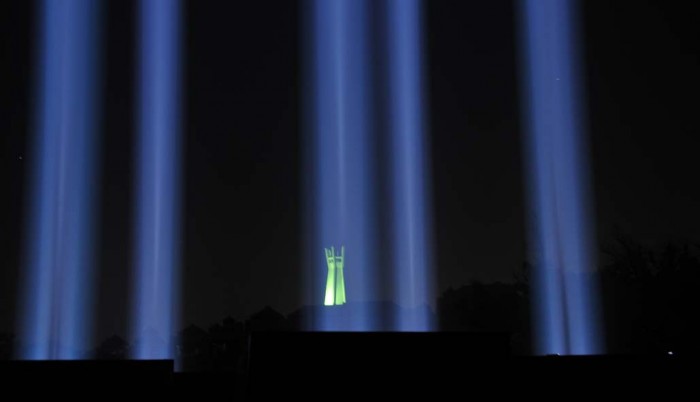 WWII era search lights are used to create “Pillars or Peace” at the Mabuni ceremony on June 22 and 23.

Searchlights which criss-crossed Okinawa skies during the Battle of Okinawa in the Spring 1945 are to be illuminated again on June 22nd and 23rd, but for the purpose of promoting the importance of peace. 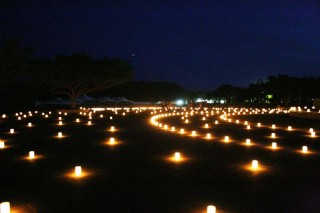 As a part of the ceremony, 1,000 paper lanters are floated in the pond of the Peace Memorial Park.

The lights, now dubbed “pillars of the peace lights,” are now a memorial service and a symbol of peace, all part of the Peace Light Triangle sponsored jointly by Yomitan Village, Zmami Village and Itoman City on the anniversary of the end of the Battle of Okinawa June 23rd.  Ceremonies and searchlights plying the sky will be 8 ~ 10 p.m. both Saturday the 22nd and Sunday the 23rd.

Admission is free to the ceremonies and sky lightings at Okinawa Peace Prayer Park, 614-1 Mabuni, Itoman City.  The whole event is divided into three parts, with

Candles also light 5he Peace Memorial Walls that bear the names of those who perished in the Battle of Okinawa.

Finally, the last one will be carried out on June 22nd at Mabuni, Itoman City where the Battle of Okinawa ended.

In addition to this, a ceremony will take place, in which about 1,000 paper lanterns will be floated down a pond. This ceremony is called “Toro Nagasi” in Japanese.  This is a Japanese ceremony in which participants float paper lanterns down a river; “Toro” is traditionally another word for lantern, while “Nagashi” means “cruise or flow”. This is primarily done on the last evening of the Bon Festival based on the belief that this guides the spirits of the departed back to the other world.

The ceremony may be done on other days of the year for other reasons such as to commemorate those lost in the bombing of Hiroshima or in other areas of the world, such as Hawaii, to commemorate the end of World War II. The Bon Festival takes place on the thirteenth to sixteenth of August or July, depending on the calendar you go by. The white lanterns are for those who have died in the past year. Traditional Japanese beliefs state that humans come from water, so the lanterns represent their bodies returning to water, traditionally the sea in this case.