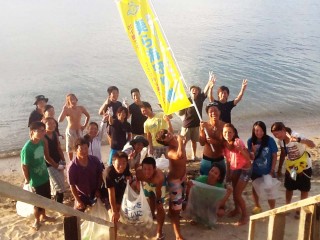 The World Ocean Culture & Environment Action Network has launched its 21st annual I love Okinawa Campaign this month, and is now looking for assistance to revamp the organization’s website.

Edo Heinrich Sanchez explains O.C.E.A.N. wants to connect the action networks of the Ryukyus, Caribbean, Hawaiian and his home islands, the Canary Islands, and needs money to upgrade the website before October.

He’s also looking for “further sponsorship especially as we continue Environment month action and prepare for the September 11,111 Nationwide Cleanup Challenge leading up to “Blue” October.  Challenged in 2010, now I have the Okinawa O.C.E.A.N.’s 2013 Team behind me.”

“For this challenge we have teamed up with World Oceans Day Japan, Umi Mori, Mensore Okinawa 22nd  Monthly Cleanup Campaign and will establish the first “Green Fins” Station in Japan at Cape Maeda,” Sanchez explains.  What is “Blue” October?

Ocean Lovers will be flying in from the outer islands, Asia Pacific and Japan to set a new standards along with the Honolulu Strategy and Okinawa Strategy 69.

Sanchez also reminds people who like to visit Cape Maeda: No cliff diving is allowed around Cape Maeda, including inside the Blue Cave.

And especially, no campfires on the beaches especially now during Sea Turtle egg-laying Season.

“I would like to encourage units and clubs to become members of the Okinawa Clean Coast Network (OCCN). Please contact edo@okinawaocean.org for details in English. We have the yearly Marugoto All Okinawa Clean Beach Campaign till the end of July but members are active all year long,” he states.

July 15th is Japan Ocean Day “Umi No Hi” and special cleanups and events are planned. Details for participation will be in the next week’s Japan Update.