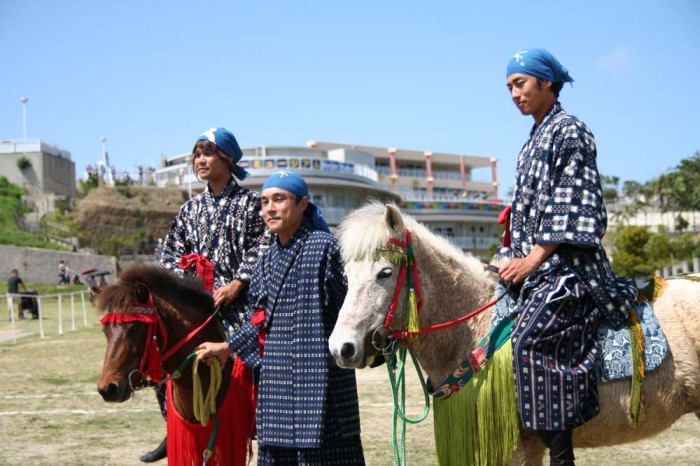 The small native breed of horses are used for “Uma Harase” events with riders wearing traditional-style uniforms made of Chibana “Hana-ui” fabric.

Traditional horse racing was once a big thing on Okinawa, pushed aside by World War II, but now being revived by Kodomo no Kuni.

The Okinawa Kodomo no Kuni, Zoo & Museum is ready to host its second horse race of the year on Sunday, July 7th, starting at 1:30 p.m., at the Water & Green Open Space in Okinawa Kodomo no Nuni.  Admission is ¥500 for adults, ¥200 for junior high school students, and ¥100 ages 4 ~ elementary school age.

The upcoming race intends to reproduce a culture unique to Okinawa but currently lost now. The “Uma Harase” horse race was performed for about 500 years from the time of the old Ryukyu Kingdom to prewar days.

Since Okinawa did not have to improve horses and make them stronger in order to prepare for war, Okinawan horse races developed into races that riders compete not so much for speed but more for the beauty. The first this kind of races in some 70 years was held in Kodomo-no Kuni March 2, and this is a repeat of the event.

Horse racing began during the Ryukyu dynasty, ultimately spreading to the ordinary citizenry including farmers when the warrior class moved from Shuri following the abolition of feudal domains as a result of the Meiji Revolution, and Okinawa became a prefecture of Japan.  The original races involved a small species of horse native to Okinawa.  The need for larger horses during the World War II era led to castration of native breeds and the local races were phased out.

In earlier eras, riders wore special uniforms made of traditional Japanese materials.  As Kodomo no Kuni helps bring this indigenous horse racing back, riders’ uniforms will be made of Chibana hana-ui woven for the event.

The special ambling gait of horses in the local races is different, with horses moving their left front and rear legs, and right front and rear legs at the same time.  It is said the unique method of running was designed to make it easier for horses to walk through Okinawa’s hills and valleys.