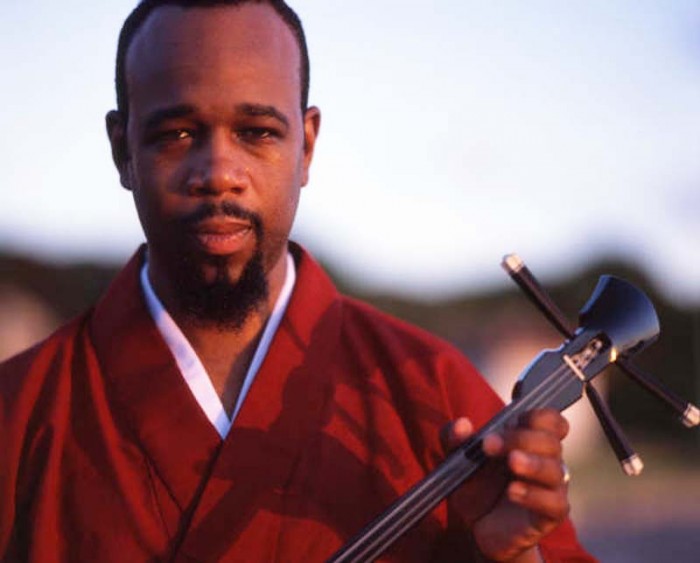 Byron Jones appreciates Okinawan culture but is worried about its future.

In the tight-knit community of professional Sanshin players on Okinawa, Byron Jones stands out in more ways than one. 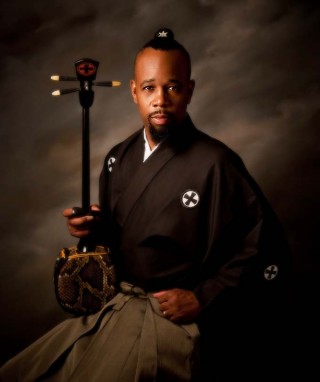 The 44-year-old American has been playing the Sanshin since he was a 16-year-old military dependent on Okinawa, and he’s never stopped studying the nuances of the traditional Okinawa instrument.  He is a certified teacher of Okinawan folk music songs and Sanshin, and is now working on his Grand Master license.  He speaks Japanese well, as well as Uchina-guchi, the Okinawa dialect, skills that give him strength playing Okinwan folk music, traditional music and traditional Sanshin.

“I’m keen on slow students” says Byron, “because I’m still trying to bloom myself.” Jones was the first American ever to pass a test set by the Traditional Ryukyu Minyo Association.

Although he doesn’t overtly dwell on it, the other thing that really makes Byron Jones stand out is that he is black. He came to Okinawa at age 16 with his family.  His father was a U.S. Marine, and Byron studied at Kubasaki High School, then returned to the U.S. to attend university after graduating here.

He says his teenage identity crisis was compounded by the impossibility of knowing exactly where his African roots lay.  “Discrimination was very familiar to me” he says “I could identify very much with the Okinawans, forbidden to speak their language, and not allowed to live in their ancestral homes, just like the Native Americans. Lots of Okinawan homes were bulldozed so the military bases could be built here.”

Byron Jones’ Ryukyu Minyo (Ryulyu folk song) teacher’s certificate, the first ever awarded to an American not of Okinawan ancestry.

Byron Jones believes that although Okinawan language and music barely survive, he can help preserve what remains and, he hopes, pass some of it on to the younger generation. “People who speak Rykyuan well are now mostly over 60. Because the kids don’t learn the language at school, the problem with traditional music is that they don’t understand the words, so the music may not last. Some Okinawan tunes have been successfully rendered in Japanese and I have done some in English.”

While in high school, he saw a Sanshin at his friend’s house, and became very interested in the traditional instrument, then asked his mother to let him learn to play one, because he loved to play any instruments since he was kid. Her answer was no, yet he became more intrigued in wanting to learn to play.  When he returned from college in the U.S. to see his parents, the desire to learn Sanshin was still there, so he learned about a shop that sold the unique instrument.

He visited there and bought his first Sanshin for about ¥36,000 when he was 19 years old, and then began his studies. Later he found a class to teach him how to really play it, then his family transferred to U.S. After returning to the states, he practiced playing Sanshin by himself, and began figuring a way to return to Okinawa. He studied Japanese at his university and later got a temporary job on base in Okinawa.

Now he knew he wanted to stay here, but he needed to get a stable job on Okinawa.  He finally got an ALT position at an Okinawa junior high school, where he teaches English and Sanshin to Okinawan kids.  That has led to fun stories that brought some TV interviews.  As he appeared on television, he drew an invitation to join a Sanshin organization, a move that spurred him to further his classical Sanshin skills.  That led to his being a member of Nomura Ryu Sanshin Association, one of the most popular in Okinawa

He is still playing and training Sanshin every day and working hard to obtain a Grand Master license.  His dream is to sing Okinawan traditional songs at an Okinawan traditional dancing stage, in English.  He thinks it would go far to promote Okinawa and its traditional world, to all of the world. He is the teacher at a military facility school on base, as well as at Ryukyu University.  He also teaches Sanshin to many private classes, and sometimes performs as a professional singer on stage. He might be more Okinawan than many natives.

The island’s only black American Okinawan folk music instructor sums up his philosophy thus: “All music is beautiful and an expression of the soul, whether it’s slow jams, jazz, Australian aboriginal music or metal. Poetry and creation come from the heart”.